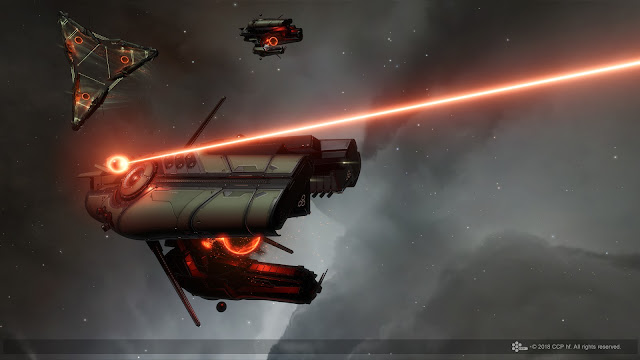 So yesterday was a frustrating day in the neighborhood. Despite getting some neuts on an Ashimmu kill before the blob arrived, nothing much else was going on. Everyone out and about was extremely risk averse and ran away no matter what we brought. This happened over and over and over again. This is typically not a good sign. I probably jumped into a half-dozen different ships to try and get something stirred up. But to no avail.

Eventually I was in my trusty little Tristan when I saw the Leshak on in a Large Plex. The pilot was 2019 or 2018, not sure which. Either way he seemed rather young to be flying a Leshak. And with no other prospects in sight, I went ahead and warped into him. Sadly he was a bit far from me when I landed and he warped off to a Gate. So I followed and landed well ahead of him. When he landed I targeted him and waited to see what he would do. He jumped thru. I followed. I targeted him on the other side and got a nice bump. But he burned back to the Gate and jumped thru again. Rinse and Repeat. I don't remember how many times we did this before I saw the Yellow Box.

Mike came over to help me but the Gate Guns got his Comet. (I felt bad and sent him the iskies to replace it.) But I did manage to kill a whole bunch of Hobgoblin IIs, the Leshak was really unable to do much against my Tristan. So I was stuck killing drones and hoping someone would come along to help.

I won't mention any names but I saw a familiar face in local and started a convo to see if they could provide some assistance. What I got instead was, "I don't shoot noobs." Which, to be fair, was said in a rather condescending tone which I frankly didn't appreciate. A noob? In a Leshak? I don't think so. I'll come back to this in a minute. The Leshak got away, he popped some ECM Drones, I killed two of them before they finally managed to break lock and he warped off.

So, just to be clear, that Leshak died a bit later on. Here is the killmail.

That could be an entire post, but I want to return to the previous statement about Noobs. These days a "noob" is not the same thing as it used to be. These days, with elevated starting skills and skill injectors being so common, a young player can - if they so decide - be in almost anything. I've seen "noobs" flying Carriers, or BS, or T3 ships. Heck, we see all kinds of weird things out in space. Some of which you wouldn't believe. So I'm sorry, but that argument doesn't hold water anymore.

Plus, who has time for these sort of judgment calls? I rarely look at a pilot's information before a fight. Most of the time I have zero time for it. Afterwards? Sure. Or like yesterday when I got into a convo with a new player in local and gave him advice about his ship fitting and encouraged him. But normally that stuff happens after a fight.

Everyone who comes into Low Sec is equal in my opinion.

And sometimes, they are flying faction fitted Leshaks. And while I couldn't break his tank with my Tristan, I still tackled him. It was Epic.