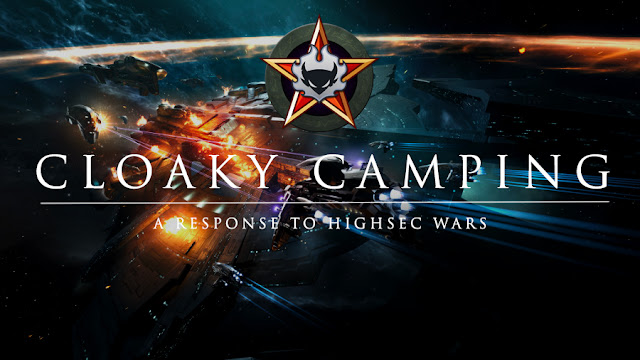 NOTE: The following is based on a recent war that was declared on our Alliance A Band Apart and was primarily written by Stay Frosty FC Watson Crick. This response was developed by Watson as a trial response to measure how effective it would be in changing the activity level of the group that had declared war against us. This is an individual incident and while we believe the results are extremely positive and warrant further trials in the future, please keep this in mind. I hope to have exact data to add to this report in the near future, but I didn't want to wait any longer to bring this to your attention. - Rixx

While the majority of ABA members spend their time in low security space, we do have several corporations that operate in high security space. While not a lethal threat, high sec wars remain an annoyance to our members. It even has an impact on those of us in Stay Frosty.

High Sec War Declarations have been the subject of infinite scorn and debates for as long as Eve has existed. Its victims usually only have two unpleasant options:
• Business as usual which results in expensive loss-mails and more war-decs.
• Fight. Not all Alliances have an effective PVP wing, and giving war-deccers fights can lead to, yes, more war-decs.

Consequently the most common response has been to turtle up and stop all activities in high-sec.

The most significant recent change to this mechanic has been the war HQ. This was meant as a way for the defender to have an opportunity to shut down a war early. Unfortunately, this option was not available to us when we were war-decced recently by a fairly young alliance named Hell Dawn. The war HQ was a Raitaru that had already lost its shield and armor, but its structural timer would expire in 8 days... after the war had ended.

Technically, this left docking up as our only remaining option, but the kill-board of our aggressor gave me an idea. Between October and November (51 days) Hell Dawn killed 502 billion isk in shipping, mostly in the pipe system of Sivala. That’s an average of 9.8 billion isk per day. I also remembered from my days as a high-sec mercenary that they, like null-sec ratters, don’t like having unknown war targets in system.

The 24 hrs lead time before a war-dec becomes active leaves very little time for intelligence gathering, developing a strategy, communicating said strategy to your alliance mates and, especially, moving ships, alts and jump clones into position. And let’s not forget that some of us need to visit the nearest CONCORD office with fistfuls of cash and clone tags (RIP my -10 security status).

The mood was set for the first evening of the war. A dozen ABA pilots were cloaked in system and our opponent had gathered a similar number. They might have been hoping for a fight but, since they could not tell what we were fielding, they remained docked and raged in Local. Our pilots never responded. However on our own comms we were having a wonderful time. It was working, NO ships were ganked in Sivala that day!

On day two, we had to demonstrate that this was not some toothless blockade with cloaky alts. T3Cs and Recons were added to the initial wave of bombers and we waited for somebody to run out of patience. They got a few kills but nothing that compares with their usual numbers. I managed to interrupt a gank attempt on a Rapier in Uedama. After we interrupted their gank on a Rapier, they regrouped in the Mini-Luv citadel in Uedama and then gradually undocked in a very good fleet: Drekavac, 2 Cynabals, 2 Oneiros, a boosher, a Lachesis and another ship.

They could have parked that fleet on the Uedama-Sivala gate and camped all night long. We never had the time to bring anything that could deal with that. At that moment, we had 12 in local but only 3 bombers and a Falcon were active.

But they didn’t know that. They saw my bomber and nothing else. Only the Logi and Cynabals jumped through and moved on to Jita. The others turned back, re-docked and their pilots rejoined Sivala in shuttles. After some Local chat PVP some of them ran away to Jita but then returned when they saw more ABA pilots in local. 8 of them hunkered down in a Raitaru surrounded by 12 ABA pilots in local. They undocked a couple of Thrashers to try to catch our very fast Slasher. Which didn't work.

On the morning of the third day, a couple of them tried gate camping again. They engaged an Ashimmu with a Gnosis and a Hurricane Fleet Issue. Only three of us were active at the time. Fortunately I had upgraded my ship to a very tanky Tengu so I warped to the gate and engaged the Gnosis. I also brought in my alt in a Nemesis because tanky Tengu = crappy DPS. The HFI ran away and, while my Rapid Lights were reloading, the Gnosis jumped through the gate with 5-10% structure left. At least now they knew our cloaky campers had teeth.

After that Sivala was ours. They moved on to faster ships (Hecate) and to other systems around Jita. But some of them still had their ships in Sivala, and we were able to catch and destroy a Tornado as it tried to rejoin its comrades. Our plan was to follow them, wherever they went. Unfortunately, PIRAT noticed our increased presence in the area and decided to bless us with yet another war-dec.

In conclusion, we believe that cloaky camping is a valid alternative to not playing EVE during a war-dec. A dozen ABA characters, flown by half as many pilots, were able to force a high-sec war-deccing alliance to leave their favorite hunting ground. Most of these alliances commonly war-dec dozens or even hundreds of alliances at a time. If these would contribute a small number of pilots and alts to cloaky camp pipe and trade systems, it would seriously impair the ability of high-sec war-deccers to use local to collect intel and feel safe while gate camping and hunting around high-sec.

We will continue to work on refining and testing the response in the future and I will report back on any additional findings as they become available.