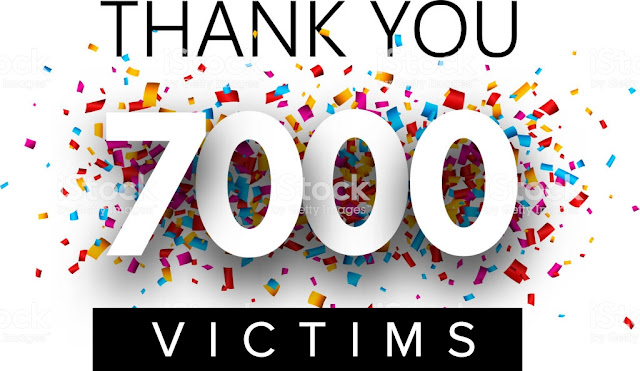 Yesterday I exploded three ships and a pod to finally reach my 7,000th kill in Eve Online!

1 - A Vexor that Angor and I found inside a Medium Plex
2 - And his pod, which was empty sadly
3 - An Algos I managed to solo with my Comet, good fight, was very close
4 - And a Catalyst I found on the way home

The Catalyst pilot will be getting a brand-new fully fitted Catalyst from me in honor of being my 7,000th victim. He would have gotten it yesterday but I mistakenly contracted the ship inside our main Citadel and he can't dock there. So I'll get that sorted today at some point.

My ultimate goal has always been to try and reach 10,000 kills, so I have 3,000 more to go before I reach that. (Math is easy!) At my current rate based on the past year this will take me about four and a half years to accomplish. I suspect it will be more like five years or more given that I (hopefully) won't be unemployed or working from home forever.

And let me be clear here. No I do not play for killboard stats. This is simply another milestone along the journey that I am celebrating. Like an anniversary or other milestone. Having said that I do play to hone my craft, and my craft happens to be combat in Eve Online. It would be kind of weird if I had been playing Eve for as long as I have been playing Eve and I sucked at being a Pirate. I don't suck at being a Pirate because I work hard at being good at my job. And so, yes, I do take some measure of pride at these milestones when they come along. I'm not going to apologize or pretend they don't happen.

And yes many players have more kills than I do. Many of the pilots in Stay Frosty have more kills than I do. That's great! I do the best I can with the time I have. And I choose to play Eve in the hardest, most difficult, and most challenging way possible. That is a choice I made a long time ago and I stick by it every day. I only play on one character. Rixx does everything for me. (I do have a HS alt that transports for me) I don't have scout alts, or probing alts, or other support alts other than the HS transport alt. Which I have to have because I play at -10, which is yet another hard choice. It would be smarter to keep my sec status up, then I wouldn't get caught on gates or stations. My life would be easier in-game. But I choose not to do that. I've been -10 for the past eight years straight and that is not going to change. On top of that I am Rixx Javix and I fly around with a huge target on me at all times. People love to challenge me, kill me, test me, belittle me, threaten me, mock me... the list goes on and on. I love it. I love when Local empties out when I arrive. I love that people come at me to prove themselves. I love the boasting people do in local against me. Bring it on. Personally I find it incredibly challenging to just be me in New Eden. It's awesome.

If I cared about killboard stats I wouldn't play this way. I care about the challenge. The hard mode choices were made to make Eve as hard as humanly possible for me for a reason. Because I thrive under that kind of pressure. I enjoy it. It helps to make Eve incredibly difficult for me personally. Eve is hard. My Eve is insanely hard.

And posts like this only serve to make it worse.

Here's to the next 3,000 exploded ships and pods over the next few years. If it happens to be your ship or your pod please know there is no malice involved. Eve is a game that I play for the challenge, the adventure, and the friendships.