on December 15, 2019
So yesterday I got a message on Discord and several in-game mails that an Athanor had been dropped in Ouelletta by a group called Galaxy Lords Holding. The weird thing was the Athanor wasn't anchored on a Moon but rather about 1,500k from the High Sec gate. A little digging and it was obvious that this was really an Intergalactic Space Hobos operation. Most likely a content generation ploy.

So we spent the day mobilizing the Alliance on Discord and waiting for the timer to pop up around 22:30 Eve time. I decided to spend the time leading up to the operation working the Diplomatic channels and see if I could find us some back-up in case things went all Hot-Drop O'clock on us. And also to camp the in gates to try and keep supplies and support from coming in. Mostly the gate camps were employed to keep the fleet busy, I've learned over the years that the hours leading up to ops can get boring - best to give people something to do. And it's fun.

Luckily this was a Saturday even though it was late for our EU players, we still managed to get around 30 pilots in fleet. As usual the numbers fluctuated a bit, but 30 is a good average. Not counting alt scouts, and other support pilots. We did manage to catch a Celestis coming into local and also a Hobos' Dominix as well. So it was time well spent.

Once the timer got close enough we switched out to one of our Home Defense Doctrines, this one based around the Brutix. We like this doctrine because a lot of our pilots can fly the ship, the rails give us good damage and range flexibility, and the Brutix is just a boss. I got into my AT Astarte which is a survivor of our last Tournament matches to provide links. And the rest of the fleet filled up with Guardians and other dps, support, as needed. And we started burning down the Athanor.

Scout reports came in from Hobos home system of a bunch of Lokis gathering around a Blops, but we weren't sure that was intended for us. We expected a cyno to pop up any second. Instead they did a log-on inside Ouelletta and about 13 of them logged into system. The Athanor was well passed half structure by the time the Loki gang landed and we started shooting them. We kept our drones on the Athanor so that it would stay in timer, which was a good call from our FC Watson. The Loki gang was no match for our combined damage and they started popping one by one. That's when the Minokawa landed to start repping them. You can see in this Loki killmail just how much dps it took to take one down under Minokawa reps.

That's when our friends in Shadow Cartel showed up with a handful of Bhaalgorns and started neuting the Minokawa. We cleared the field or they withdrew and for a while it was just us shooting the FAX and trying to bring it down. We briefly considered undocking Carriers or Dreads, but I felt it would be a mistake to escalate the fight into Caps at this point. Once it was apparent we didn't have enough dps to kill the Minokawa we switched back to the Athanor.

That's when they dropped 7 Carriers, 2 Revelations and yet another FAX on us. So the escalation decision was the right call. The fleet was anchored on me so I started moving away from the Caps to the other side of the Athanor, as we kept pounding at its structure. As you can see from the screenshot it finally exploded.

Then we started shooting Fighters, especially those annoying Siren IIs with the long points! At this point the field was lost and everyone pretty much decided to break things up. Good fights were given in local and our pilots started looting the field.

That was truly an epic fight and ABA stood our ground against overwhelming odds. You can see the Battle Report here or below. 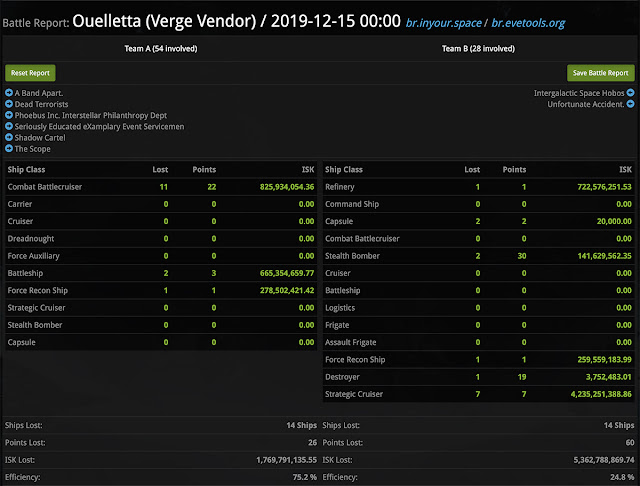 I'd like to thank everyone involved for a great fight. If the point of the Athanor was to generate content then it worked as planned, all of us in A Band Apart appreciated the content. Special thanks to our friends in Shadow Cartel for showing up to help, I know the timezone was challenging for them as well - but we appreciate the support. And to others who joined in the fight without officially sanctioned support, thank you as well. You know who you are.

It has truly been a non-stop couple of months.