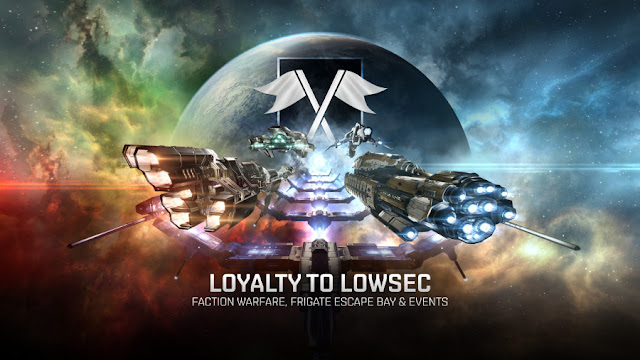 Apologies for taking so long to write this post, lots of Coronavirus stuff to deal with this week. Stay safe everyone, wash your hands, and practice social distancing. It is vitally important to flatten the curve and keep our hospitals available for those that need it. Remember, you could already be infected and not know it yet.

After what feels like an entire decade of asking for some attention to Low Sec, CCP has finally responded. On March 24th they will be rolling out what amounts to some significant changes, updates, and additions to the best space in the game. The one I rule over. So, let's take a look.

From my own perspective the biggest change is also the easiest and one I've spoken about to every single Dev over and over again in person every chance I've gotten. And yes, you could literally see their eyes roll back in their heads when I would do it. Now, when I enter a FW plex for combat, I will be getting a suspect timer. Which doesn't matter to me at all, I'm -10 anyway and fly around with a natural suspect timer built in already. (You can shoot me anytime!) But it does matter to some of the people in FW that might be inside that plex. Why? Well right now if they engage me they can take a standings hit for doing so and grab a nice suspect timer for the effort. And while some don't care so much, most do. I can't begin to tell you how many fights don't happen because of this. I've literally had people use this as an excuse for running away.

That one is a big deal. Now they don't have to worry.

Increased activation areas around FW plex gates. Essentially this is a return of a mechanic that was there at the beginning and got changed to 2,500. This is being tested on SiSi right now so we don't know what it will be yet, but it will be the same for all gates - so I'd guess 20k will probably be where it lands. Mechanics like this don't bother me either way, you learn the new way and adapt to it. So whatever. If it makes FW people happy then it makes me happy.

Also there will be lights around the gate to show the distance and those lights will change colors to express to current state of the plex. All good stuff.

And then we are getting a brand new gate class for Battleships. This, combined with the new Frigate Escape Bay, will hopefully help bring back BS to Low Sec. I hope so. So this is also something we've been asking for, so yeah.

For a short time between March 24th and April 6th warp speeds and loot drops will also be increasing. And there will be a contest to determine the "Champion of Low Sec" based on the ISK value of kills during that time. I only wish they would exclude Cap kills for this contest, but it appears they didn't do that. All of us in ABA will give this our best shot, but I suspect someone will just sit around blowing up Caps for a week and walk away with it. I won't mention any names.

Other things like LP rewards and whatnots are also getting changed, which is great. But those don't affect me other then making LS more better in general - which is always awesome.

While there was no word on the WCS Ban, all in all these changes are much needed. Hopefully this won't be the last of the Low Sec love we get from CCP, but seeing as how long it has been, I'm very, very happy right now.

And now for the biggest change of them all.

"War HQ structures will now have a reduced armor reinforcement period of 24 hours (down from 4.5 days) giving defenders a realistic chance of taking down the HQ within 7 days."