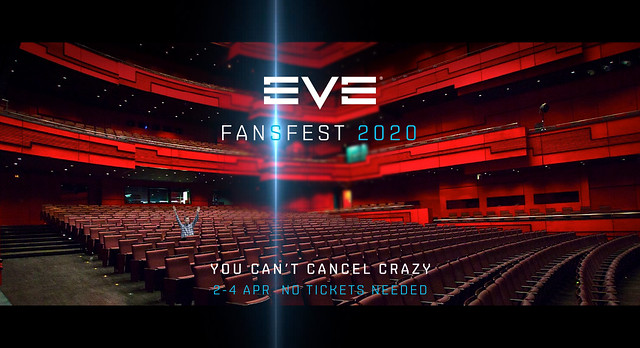 CCP didn't have a choice. Cancelling Fanfest was really the only option. There are now 16 confirmed cases of Coronavirus in Iceland. When they announced the cancellation there was only one. With the second coming on the heels of the announcement. Whatever happens next, and no one knows what that might be, there really was no choice.

Even at nearly a month beforehand the announcement left a lot of Eve players in a "nonrefundable" position with airline tickets, hotel rooms, and potential tours, rentals, and other expenses. And while some renumeration can be expected, such as taxes on airline tickets or potential travel insurance paybacks, for most players they found themselves stuck with some measure of investment on the line. I know my Wife and I did. But when I called my Wife to tell her about the cancellation, she immediately said, "We should just go anyway."

And that was when Fansfest was born. The idea is simple, why not just go anyway? The way things stand now, no one is stopping us. And while that might change in the coming weeks, if a travel ban does happen it is nothing but good news for getting money back. After talking to a bunch of fellow players it was generally decided to try and organize such a crazy notion.

So we set up a Discord, which you can access at this link.

What can we expect at Fansfest 2020? Well for one thing Iceland is awesome. I'd go to Iceland anytime, Eve event or not. The Island is insanely beautiful and we've seen most of it. If we do get to go, this will be our fourth trip. So Iceland is worth seeing. Plus it will still be full of Eve nerds. Right now there are about 100 people in that Discord, which means there are several hundred more that haven't heard about it yet. (Not to mention the few players that haven't even heard about the cancellation yet.) So we're planning on getting together and talking about Eve anyway. It has been two years since the last Fanfest and many of these people we haven't seen since then. So it is always great to meet up with old friends and make new ones.

Other than that? Who knows. There are rumors, but right now CCP is dealing with the CSM Summit. So I expect we'll hear more from them in the coming weeks about how they might want to handle a bunch of crazy nerds showing up.

I'm looking forward to it. And I hope that we are still able to go once the end of the month rolls around. And I hope to see you there.