Should We Ban Supers from Low Sec? 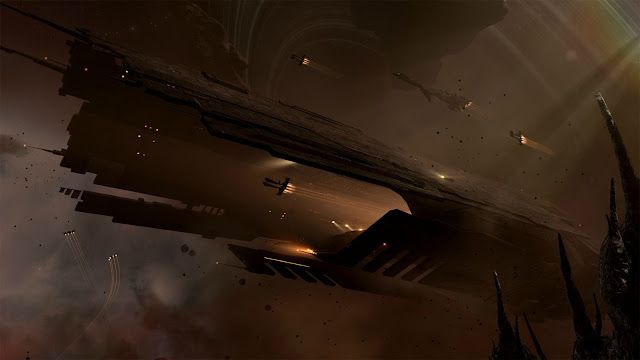 The other day I saw something I never thought I'd see in Low Sec. I watched an Avatar Titan that was tethered to a Perch Citadel (a Perch Citadel is popular in Null Sec, you anchor the structure on a perch above a gate so your ships benefit from the tether safety and can easily warp quickly to the gate to attack) warp to a gate to attack three Machs. I didn't linger to see how that fight went, but when I came back thru the system later the Avatar was safely tethered once again.

Now I am 100% behind player initiative here. And if someone wants to use their expensive penis toy to fight that way in Low Sec, more power to them. I just want to be clear because Eve players immediately jump to the wrong conclusions when you start questioning play choices. Trust me, I've spent a long time trying to explain why Warp Core Stabs are bad game play for Eve. (It's a bad module whose benefits could be provided in more creative ways! Just look at the Venture for an example.)

I'm not inherently saying that having access to Supers in Low Sec is a bad idea. But let's take a deep breath for a second and look beyond the ships themselves and take a look at the logistics required. And then see what impact those choices have on an area of space that I love.

Let's use that Titan as our example. That Titan can't dock at the Perch Citadel. That was an Astra and Supers can't dock in them. So the only way to protect that super expensive ship is from the tether safety he gets from that Citadel. Which means he had to jump it into system from a Keepstar somewhere. (Either that or a Large POS, and why aren't POSes gone yet?) Most likely that Keepstar is in Null Sec, because Keepstars in Low are extremely rare and tend to get exploded shortly after they get built. Which means the Titan pilot has connections to a Null Sec entity, or is himself a member of one. Which is typically how this works. Super access has meant a transformation of Low Sec into a farming land for Null Sec entities.

Doubt me? Just take a good look at the results of the so-called "Champions of Low Sec" event that CCP recently held.  Pen Is Out, Snuff, and Test. What do all three of these groups have in common? They all have Null Sec ties and access to Supers. In fact, they think so little of that access that one of them was willing to sacrifice a whole Titan in order to win the contest. The Snuff flag flying in Iceland should be a picture of an Avatar.

In our neighborhood we have a pilot that flies with a Null Sec Alliance. In his spare time he runs a bunch of multi-boxing alts and camps gates in local with expensive ships. We all do what we can to bait him into traps, explode his ships, and generally try to make his life difficult - but generally speaking there is little we can do. As he will proudly tell anyone in local, he is more than willing to drop his Nyx once the chips are down and the fight isn't going his way. A Nyx he keeps safely docked in Null Sec. He has a personal umbrella of safety against which most groups in Low Sec have no defense.

For groups like mine Supers don't have an immediate impact on our playstyle. My concern is the impact they have on the content availability that Low Sec provides. And that does impact groups like mine. Much like the increase of Gate Camps, Supers mitigate activity in a negative way. And activity is what groups like mine rely on to generate content. I have a lot of hungry mouths to feed and all they eat is content.

So while I don't want to actually ban Supers from Low Sec - I do want some tools to legit fight them. What those are I don't know, there aren't any easy answers. For us, we continue to build a response fleet and increase our own ability to project power beyond our normal capabilities. And I suppose that path is the only one available to us. At some point in the near future that may require networking with a Null Sec entity and giving up some measure of our own valuable and hard won independence in order to secure some temporary security. Hmmm, I seem to remember someone saying that was a bad idea once.