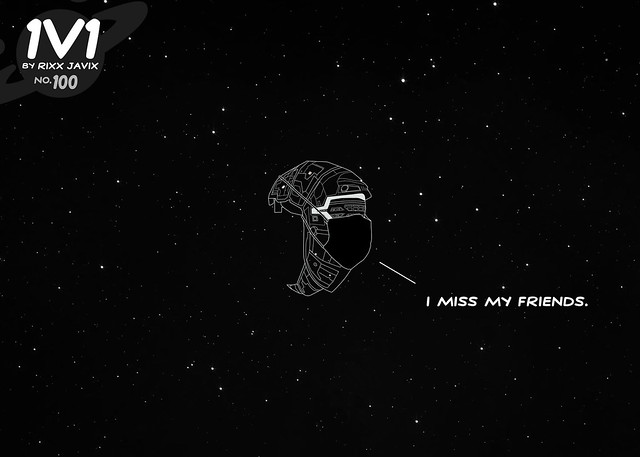 Ten years ago on March 9, 2010 I published the very first 1v1 Eve Comic. Back then I had no idea what I was going to do, or how I was going to do it, or what it would even be exactly. At first I decided to challenge myself to do a strip every Friday, of every week. And I did manage to do that for awhile. Back then I drew the comic on note paper in my office when I arrived around 6am on a Friday with a ballpoint pen, scanned it into Photoshop and then inverted the drawing. I gave a bunch of these drawings away at Fanfest a few years back and no one seemed to notice they got them. This is the impact the strip has had over the last decade. Zero.

But I did it. And now, looking back at all of them (which you can do on the page or over on Flickr ) they do represent a certain kind of time capsule look at the history of Eve and many of the challenges we've faced over the past decade. There are jokes that I doubt many newer players would even understand at this point. Like the Watch Scorpion. Or Helicity Boson getting banned. If they even remember who that is.

I didn't create the strip consistently over the years, there are gaps. But along the way I started drawing them in Photoshop directly and made a decision to make them better and put some effort into them. I figured if this ends up being my legacy in Eve Online then I might as well put some effort into it. I sincerely hope this doesn't end up being the only thing I'm remembered for, but one never knows.

I never get the sense that anyone actually gives a crap about these other than myself. Which is fine. I've made 100 (103 counting the specials) over ten years and that makes me happy. I enjoy doing them and plan on continuing. And if, after all that, I end up being the only one who cares then so be it.

I think what I said in that first post ten years ago still rings true today:

"I figure Eve deserves a comic strip and I'm just the guy to do it.  Or attempt to do it.  Either way, I'm gonna do it.  And keep doing it until someone makes me stop.  Or chases me through the streets with torches.  Let's hope it doesn't come to that.  Either way, I hope you enjoy them.  Mostly this one, since it is the first one.  You can't possibly know if you'll enjoy the rest yet, since they don't exist.  Although, if you do enjoy this one, you might believe you would enjoy the others that come later.  That's on you though.  I make no promises.  You'll just have to live with your own high expectations.  I warn you, as a friend, that high expectations usually lead to disappointment.  But if your ok with that, then so am I.  'Nuff said."