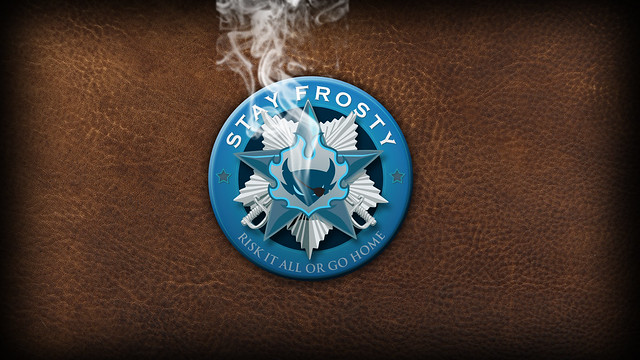 What makes a great Pirate Corporation? That's easy, the answer is the people that choose to fly with you. Many of those that joined us back in those very early days are still with us, and many who no longer play Eve still hang out with us on Discord. Over the past 7 years thousands of pilot have passed thru our hangers, some stay a long time, some stay a short time, and some discover that the Pirate play-style isn't for them. But all of them learn something from their time with us and it is hard to fly anywhere in New Eden today without running into a current or former member of Stay Frosty. We're everywhere. And for most, those ties last forever. Our players are what give us our strength.

What gives us our power is our unwavering commitment to the Stay Frosty Code. That remains a constant foundation to everything I do and our pilots do. Break the Code and the consequences are swift and just. Our members know it and more often than not they self-regulate themselves because they know I will have their back. That kind of leadership is critical to building an organization that stands the test of time. And we've expanded that philosophy into our greater Alliance A Band Apart which we formed a year after Stay Frosty began.

Have we become the greatest Pirate Corporation that New Eden has ever seen? I have no idea. In the greater scheme that goal is pointless. Who measures such things? I leave those types of answers to other people, historians, or whoever wants to chime in with an opinion. The "greatest" to me is a personal question and my answer is a resounding yes. But naturally I'm extremely biased. It has never been a goal beyond the confines of our own corporation and the players that choose to fly with us. Our goals remain the same every day, to have fun, find good fights, and provide content. We have no greater goals beyond those as an entity, everything else is based on every pilots personal goals. To become better at PvP, to score those insane victories, loot those faction mods, or whatever else they might have in mind.

With all that said, pardon me while I brag a little.

Our killboard speaks for itself.  130,000+ kills over 7 years is a 1,500 a month average. Over that stretch of time we've maintained an even split between Solo and Small Gang that is unmatched anywhere. With 64,000+ Solo kills, for a 49/51 split. What I do know is that is insane and extremely hard to do over that long a time period. Unheard of and unmatched.

Our members are hungry for content, and together with our greater Alliance family, we've generated a ton of it over the years. No matter what crazy idea our members come up with we tend to give it a go, from taking Sov in Great Wildlands, to taking down structures in WH space, to holding FFAs, no matter what we all just want to play Eve and have fun doing it. Mostly in Frigates.

The best decision of my Eve career was establishing Stay Frosty seven years ago. I had no idea what would happen next. No expectation that it would work. And here we are, seven years later. I've enjoyed every minute of it and wouldn't change a thing. To all of those players who have chosen to fly with us - thank you for the fun, the adventure, the memories. And to all those who remain with us today, I look forward to undocking with you every single day. You truly are the best.

Thank you. Here's to the next seven years of Staying Frosty.