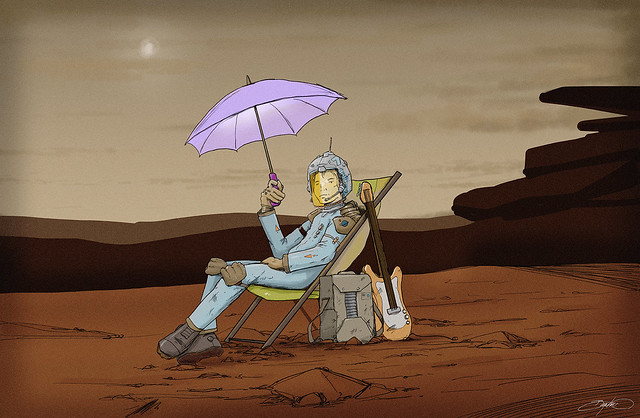 When I was in the sixth grade a classmate paid me $5 for a drawing I had done of Iron Man. That was my introduction to the idea that "art" was something you could get paid to do. What a concept. But I didn't truly believe it yet. At that point my vague ideas about my future included more tangible concepts like Air Force Pilot, Astronaut, and, maybe, some kind of architect. (If Mike Brady could do it, then so could I! And yes, I just made a Brady Bunch reference.)

Despite some early success in the comic book industry and a few close calls here and there, I never really considered myself an artist. I was trained in Art School to be a graphic designer and my skills in that area, combined with my early interest in computers, film, animation, and storytelling - all led me down a completely different career path. I was more of a creative than an artist. I continued to draw, but now it was usually in the service of a logo, or an animation, or some project for a client. Illustration was about advertising and marketing. It was a service that I typically started hiring other people to do.

I'm skipping a lot of stuff because this wasn't intended as a history lesson. I've accomplished an insane amount in my life, much of which would have blown the mind of that sixth grader. And finally my life and my family's lives, are such that I can pursue something new. I don't have to take the soulless corporate position for the money. I have the time now to work on my own skills and develop my artistic creativity. And hopefully, if I'm lucky, make a living along the way.

My wonderful and supportive wife deserves all the credit in the world for this. After so many years of struggle, we are finally on the other side and she has been incredibly supportive of my dreams. I was told for a very long time by a very evil person that I was no artist. And every time I sit down to create something that voice plays in my head. I have my own demons that plague me. But every day that voice gets smaller and smaller. Every time something good comes from something I've created, that voice grows more distant. That is the gift that I have been given and I aim to make the most of it.

The point of this post however, isn't about me. I wanted to say all of that as someone who is on the other end of a very long career path, to anyone reading this who happens to be on the beginning of a rather daunting new career path. In other words, from one older dude to any younger people who happen to stumble upon these words. Your path will take you on some incredible adventures, most of which you cannot even imagine right now. All you have to do is step into it. Be prepared, work hard, and develop the talents you have. They will never fail you and no one can take them from you. You may not end up where you imagine, but you will end up somewhere. That I guarantee.

My advice is this. Learn and listen to those whose words uplift, teach, and empower you. Ignore those that seek to tear you down, and fill your life with negativity.

Trust me. They aren't worth it.