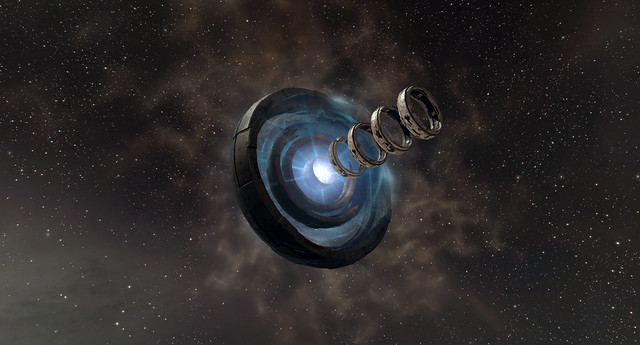 What does a great day look like for the Pirate Lord of Low Sec? Does it involve exploding vast numbers of ships? Maybe, the number doesn't matter, but lots of explosions are good. Stealing lots of hard-earned loot? Loot is good, I do like loot. Flying with his friends? Sure, that's why we have friends! An amazing solo kill? Ok sure, all of those things are awesome and I enjoy them tremendously. And while I've had uncountable great days in Eve over the last dozen years and many incredible experiences, adventures, and legendary stories - yesterday was certainly a great day.

Here we go. I undocked in that Punisher I was talking about yesterday and saw the cyno on d-scan. I immediately docked up and grabbed the Welcome Wagon. The Welcome Wagon is a Gnosis I have fitted to welcome guests to my home system. People appreciate being properly welcomed. Especially when they haven't asked permission to light a cyno in my home system. That's just rude. On the way back to the station I noticed a Tayra docking up and decided to wait outside to greet him. Sadly he had dropped off all of his goodies inside. Oh well, I've been online for less than five minutes and I already blew up two ships and two pods.

Mitridate and Cervantes were out in T3 Cruisers so I decided to join up with my Legion and see what kind of trouble we could get into. We chased a bunch of ships around and generally started gathering intel around a cluster of systems near Ostingele. I call this sort of activity a SharkPak, circling and circling an area of systems to get a feel for who is around, what they are doing, and what they might be flying. We had a bunch of close calls and while I was waiting for another one to work itself out I noticed two Catalysts in an open plex. So I went in to say Hello. I could only grab one and the other one managed to escape.

This is when someone in local said they liked my name and that it reminded them of a DJ name. I said thanks and told them it was actually based on the capital of Iceland. I love when people have no clue who I am, it keeps me humble.

So Cerv is cloaked up in system watching for this Loki he spotted earlier. He notices a small ship in one of the belts and warps over to check it out. As he's landing he spots the Loki de-cloak and go for the smaller ship. And this is just a classic "Eve Always a Bigger Fish" moment - so he de-cloaks and points the Loki. Then Mitridate and I arrive in our Tengu and Legion just as his buddy in the VNI lands. Needless to say we manage to get them both. The Loki and the VNI, and some juicy loots.

We came very close to catching an Orca. We came within a hair of catching a bunch of mining barges. These close calls continued for a bit. And then one of those weird things happened that happen in Eve sometimes. You're just sitting cloaked somewhere trying to d-scan something, or talking about what to do next, when out of nowhere a Megathron lands 20k from you.  Bob giveth and Bob taketh away, but yesterday Bob was in a very giving mood.

That was fun. That was a great day.