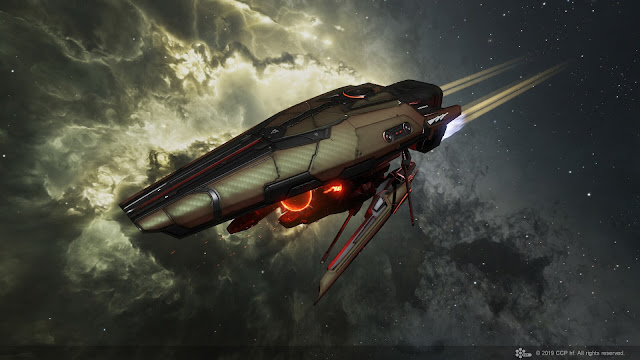 I like to fly a lot of spaceships. I get bored easily and I enjoy variety. Sometimes I will look at a ship in my hangar and think, "Gosh, it has been forever since I tried to fly a Cormorant." And then fit one up and take it for a spin. I realize this sort of mindset is not going to make for the world's best kill-board and I've long ago resigned myself to that fact. I don't play for statistics, I play for fun. And personal satisfaction.

So today I thought I'd take a look at the ships I've been flying recently and give you some of my thoughts about each one. Let's get started.

Nergal - I love flying Triglavian ships, they are fun to fly and they work really well. My workhorse tends to be the Drek and I have a handful of those around to rely on when needed. I also love flying the Kiki. I started flying the Nergal because I got this really badass skin for it, seriously, it has claw marks!! I don't get many fights in this thing, so it is usually only for small gang support.

Devoter - I keep a few super long point ships around for special use, y'know, for moments when someone is trying to gate jump a Rhea! Which happened the other day. Sadly we were not able to catch the ship, but we hung around the gate for awhile hoping it'd come back. It didn't, but we had fun and caught a few other ships, including a hapless Gila.

Kikimora - Told you I liked flying it! The other day I had a great 3v1 fight in this thing that was epic. I pulled off into a plex at about 70k when two Slicers and a Comet followed me. The Slicers engaged but the Comet held back. I popped both Slicers easily and went after the Comet but he ran off. Can't blame him. This ship is nuts right up until you get caught. Don't get caught.

Legion - I haven't historically flown T3 ships all that much and I honestly don't know why exactly. I mean, part of the reason is that some of them have sucked at various times, plus they tend to be pretty expensive. Heck I still have my very original 100mn AB HAM Tengu in my hangar! (It and my original Proteus were trapped down in Syndicate for years, until I went and rescued them) But lately I've been jumping into this Legion and my Loki for some fun. They are super useful for catching bigger prey.

Slasher - Yesterday Stay Frosty had a Slasher roam and we all flew Slashers. We didn't all return in Slashers, which is why the next ship on this list is the Punisher. I love Slashers and they might very well be my favorite Frigate right now. So much fun to fly.

Punisher - My Slasher exploded while I was hero tackling a Caracal and Hunzy was nice enough to let me borrow a Punisher. I've never been much of a Punisher guy, but I have fitted up a few lately to try out again. Tough little ship, but I think everyone expects it to be bait.

Raptor - My Raptor exploded while I was hero tackling Corvus Onzo's Rook. After the recent Interceptor changes the Raptor has become pretty popular with some of our Stay Frosty pilots so I had to give it a try. I'll need to fit up a few more of these.

Astero - All things being equal I'd probably just fly this ship all the time. But I have to force myself not to. I love this little ship and it has everything I love all wrapped up into a tough little sneaky bastard. But there are so many other ships!

Catalyst - The other day there was a Catalyst that killed my Hookbill and my trash Algos, so I fitted up my own Catalyst and killed it. I can't imagine any other use for it, but I'll keep it around for special uses.

Those are my recent ships. I may not fly those specific ships again any time soon, because I have so many others to jump into. Variety is the spice of life.