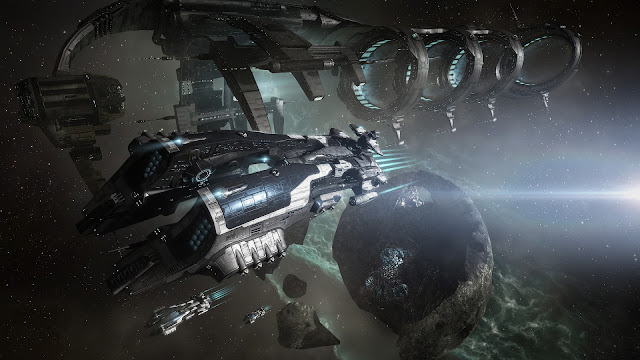 I've been slowly getting back to a normal schedule in-game after the insanity of the Alliance Tournament. That event always takes a lot out of you and, as I've learned over the years, it is best to recognize that and take it easy for a bit. Before plunging back into the fire. That doesn't mean I've stopped playing or having adventures. Just yesterday we tricked a Eve-Uni Osprey Navy into attacking a bait Procurer in our home system, and I had a good 2v1 in my Astero with two Merlins (one here, the other one), and then I spotted the Megathron.

Battleships in Low Sec are pretty rare. And if you do happen to see one they are usually attached to a larger fleet. Solo Battleships do happen, but they are very rare. So while they are extremely tempting to tackle, you have to be prepared for what might happen after you do so. All of which means, for me, I will always tackle a Battleship. The trick is getting them off of Gates or Stations and into a position in which an attack can actually happen. Oh and the other trick, being in a ship at the time that can actually survive tackling a Battleship. Which is important.

I was in my Skybreaker.

So I reported the sighting in Corp Chat but unfortunately no one was nearby to help. So I decided to follow the Mega and see where he might be going. He warped to an iHub and I went in after him. That's when I noticed Sem Skord in local from Black Rebel Rifter Club. I immediately opened a convo with him and turns out he was also chasing the Mega. I just missed grabbing point at the iHub and now the chase was on. Turns out Sem had a few Rebels with him, so there was the backup I needed.

We followed the Mega back and forth a bit, gates, stations, and a few jumps until he popped out into Hevrice. It was here that he made his fatal mistake and warped to a Small Compound. We grabbed tackle and started taking care of things. I kept point and promised I wouldn't shoot, so as to not do damage to my comrades by doing so. If things got hairy I could always start shooting, but it's never a good idea to shoot those who are trying to help. The Skybreaker is such a weird ship.

Meanwhile it was taking forever to explode the Megathron, with two Rifers and eventually a Merlin. We spotted a Rupture on scan and figured it was coming to save the Mega, but it never arrived. So eventually the Mega exploded.

It wasn't until later that I found the email the Mega pilot had sent me asking me to not shoot him for 50m isk. It's a shame I don't check my email during fights.

Thanks to the Black Rebel pilots for the help. As much as I would have loved a solo Skybreaker kill against a Megathron, it was just as much fun doing it together.