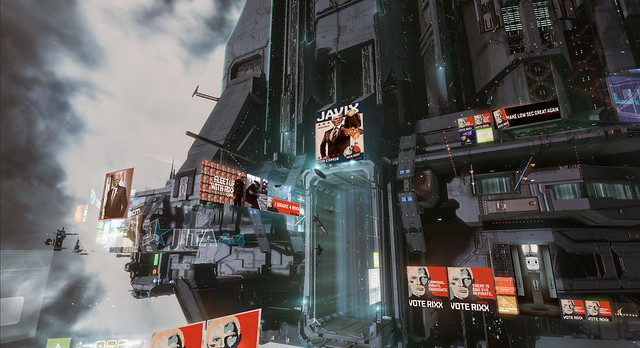 Starting on June 8th after DT and running until DT on June 15th, all Eve players will be able to vote for the Council of Stellar Management. This is an important decision and one not to be taken lightly. Whatever you personally think about the CSM the facts are that they form an important part in formulating the general and often very specific way in which Eve grows, what CCP releases, and the details behind those releases. They also represent you, the player, to CCP. I should say "we" since this year, for the first time ever - I am running for CSM.

I didn't make the decision to run lightly. But once I did make it earlier this year, I have put my entire effort into not only running, but also into listening. I've held numerous open talks on various Alliance Discords and Teamspeaks, as well as appearing on all the major twitch streams, podcasts, and other outlets. I take the idea of being YOUR representative very serious. And I sincerely appreciate all of the support I've gotten during the course of this campaign period. Thank you.

I also take my endorsements very serious. Historically my endorsements run at around a 75% success rate. And that was before I decided to run and spend time with the candidates beyond a simple conversation. This year I took some additional time to come to my conclusions based around several assumptions to help guide my choices:

> No Major Bloc Candidates - They get enough support as it is and typically take 6-8 seats every year.

> Personal Connection - I have to know someone in order to endorse them.

> Team Player - I hope to be serving alongside my endorsements and I want to be sure we can work together.

> Wide Areas of Expertise - While I'm focused on LS/FW and other areas, I also want candidates that bring expertise to the table that I believe will benefit other players. Diversity is key.

With these guidelines in place I was able to build a strong list of endorsements I believe in. You can trust that I know them, and that I believe we can work together to help guide Eve into its third decade. I would be proud to serve alongside each of these candidates as your CSM representative.

Remember that your CSM vote is a ranked vote. Number one votes are more important than number ten votes. With the built-in support that major null candidates receive it is critical to vote for independent candidates in the top of your ballot. The more number one votes I can get, the more likely I am to be elected.

And of course I'd put myself first. It'd be weird if I didn't. I'm also confident that I am the best choice to represent you on the CSM. Given my history, my connections at CCP, my long-term advocacy of this game (I didn't just start caring a couple of weeks ago), and my experiences out here in the real world, that I will make an excellent CSM member. One who communicates, listens, and is willing to stand up to CCP when it counts. I have 4 cease and desist letters that prove that. Name another candidate who can say the same?

I sincerely appreciate your support and will work hard to represent you.

I know very few people whose knowledge of the game I trust more than Suitonia's. I also know that he will work with me to represent LS/FW and fight to bring the Alliance Tournament back. He's served on the CSM before and has the experience needed to help guide it forward. He is a LS player and will represent LS on the CSM. We need more independent CSM candidates and Suitonia should be on your ballot.

Phantomite is below Suitonia only because he is an incumbent. He served on the CSM last year and should be re-elected this year alongside myself and Suitonia. Imagine what we can accomplish if we can work together to do so?

Wormholes are another area of Eve that has been long ignored and we need solid WH representation on the CSM. There are a number of good candidates, but I believe Teddy and the one next on my list are the two best choices.

As a former Tusker myself I believe Stitch will not only be a solid WH representative, but will also have solid LS and Alliance Tournament support that will help me get those areas addressed as well. For that reason, I think Stitch should be your second WH candidate choice.

There are few people I've known longer than Mike. Back in 2019 I visited him up in Canada after an Eve Player Cruise to Alaska and finally had the chance to meet him in person. Mike showed up at my very first public event way back in 2009. Mike is another incumbent with a lot of CSM experience and I look forward to the opportunity of serving with him.

I also know Jim in real life and, as with many of these choices, I know Jim is good people. He comes to the CSM with a unique perspective and with incredible player access and experience. I believe that makes him a solid independent voice that is vital for the CSM.

Industry, Third-party development, all issues that I also believe in and know that need representation on the CSM. For that reason, and all the ones listed above, Dr Spodumain will be on my ballot.

And then lore. Yet another often under-appreciated area that could use a solid candidate on the CSM. Uriel is good people and he deserves a seat on the CSM.

And last, but certainly not least, is my friend Jurius. New players are yet another area that needs more attention and few people are as knowledgable and experienced as he is in helping them. Jurius deserves your support.

A few last words. Vote however you want. These are my well-considered suggestions based on my own experience and wishes for more independent voices on the CSM. This does not mean that I don't believe NS candidates can't be good CSM members, that would be silly. But, like I said above, those candidates come along with built-in, massive support and often take the vast majority of seats. My job here is the highlight and support my fellow independent candidates. Hopefully we can take more seats this year and have a more diverse and representational council than in years past. If this post serves any purpose at all, I hope it will serve to assist in that goal.

And finally, from me, this has been a fantastic experience. I've enjoyed every minute of it and I have even more to do before it ends. Let's get out and vote.