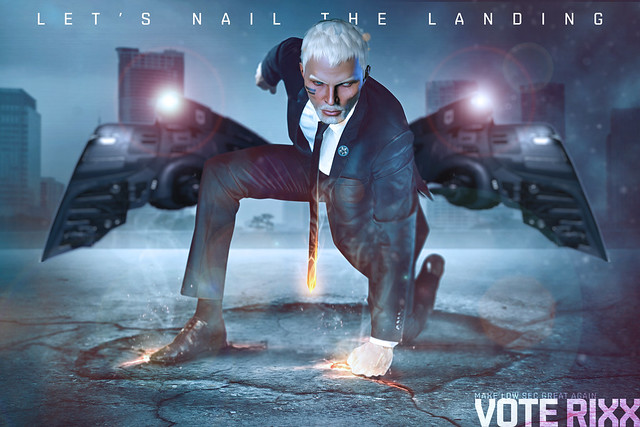 This week's posts have been me publicly dealing with the conclusion of the CSM16 elections on Monday. First I posted a well-considered optional plan for choosing the CSM based on representation instead of pure popularity. Then I wrote a double truth-bomb post to talk about some of the various issues I believe are helping to hurt Eve Online. From angry former players who haunt the forums and social media outlets, common misconceptions about the role that CCP plays in a sandbox game, issues with perception regarding the distribution of players in New Eden, and more. These posts caused a bit of a stir, which is good, I enjoy debate and open consideration of ideas. This is how we fix things.

It was always my plan to wrap things up here in today's post. And as I was told this morning on Tweetfleet, "I hope the conclusion is good, because the lead up has been disappointing." That was from my pal The Nosy Gamer. We don't always see eye-to-eye. This doesn't even mention the long reply I got from Brisc on my last post, but I'll get to that later.

There is no way to fix the CSM. There is no way to fix angry former players from haunting the forums. There is no way to fix the idea that CCP is out to destroy your specific play-style. Or the perception that Null Sec is the end of some sort of ladder of progression for players in New Eden. I can't change these things. We're eighteen years into a long, slow, inexorable decline. The sheer amount of momentum at this point is unbearable. Just watch the reactions when anyone proposes anything out of the ordinary, radical, or otherwise against the wishes of the powers that be. Trust me here, I am well acquainted with the results.

I've always taken a great deal of pride in being an independent voice. It guides my choices in-game as well. I could have chosen another, perhaps easier, path. Instead I choose to be what I consider to be the best play-style in all of New Eden - a Pirate. And over the last decade+ I've worked my ass off to not only be a Pirate, but to be the best Pirate in all of New Eden. Leading the last significant cohort of totally independent old-school Pirates left in the game. That is not a popular choice. In a game dominated by other mentalities, my choice is not a populist one. Trust me here, I hear about it every single day.

Independent voice. Independent actor. I was more than curious how that history would translate to the CSM campaign, so I decided to run. I did better than I expected, but worse than I had hoped. I knew going in that I would need around 1,000 initial votes to have a chance and I got 573. I knew what that meant, and while a few surprises remained, the end result was exactly what I expected. I ran a great campaign, a campaign unlike any before it. A total media blitz with as much reach as possible, given the restraints. The numbers were solid, the outreach strong, the behind the scenes deals strong, independent, and true. And yet, 573 votes.

As I expected it is impossible for an independent candidate to be elected to the CSM. Every single candidate elected appeared on a major null-block ballot.

I rarely listen to null-block media, but yesterday I was curious and decided to listen to the Talking in Stations post-election episode and I found it rather hilarious. The null-centric players preaching to others about organization, and how we can simply do what the null-blocks do and get our candidates elected. Easy, the votes are there. They miss the point of their own perspectives. It isn't the organization, or the diplomacy, or the careful consideration of voters that give NS its power - it's fear. The fear of NOT being on one of their ballots. The fear of being "outside" of that circle. Because every candidate knows that would be the kiss of death. No one else in this game has that ability. Only they do.

Before the campaigns got started, Suitonia, Phantomite, Arsia, and myself got into a Discord together. The goal was to work together to help LS ensure a candidate got elected. Phantomite was the incumbent. The only real solution would have been for myself, Suitonia, and Arsia to not run at all and work to help Phantomite get re-elected. But, of course, no one mentioned that idea. Because none of us wanted to not run. Ultimately I ended up leaving that Discord, because no one talked, discussed, or worked together. We all had our own campaigns to run. And our own deals to make. For others that meant selling out to the powers that be. Which is fine for them I suppose. I'm not making judgements here. I'm really not.

I'm a Pirate. That is never going to change. As a Pirate I know we must work hard every day to adapt or die. Changes to anything impact us immediately and remorselessly. We have to stay up on every tiny little thing, because our very lives depend on it. We operate constantly at the razors edge. You might not believe this, but even industry changes, or changes to WH space, or changes to NS, impact us across the board. I believe this gives me a rather unique perspective. I never think in a tunnel, which most (but not all!) Eve players seem to do. I think about the ecosystem as a whole, because that is how I have to think about it. Cause and effect.

I speak my mind. I always have. This has led to some incredible, amazing, and rather horrible consequences over the years. But I have never backed down. Nor will I. Out here on my soapbox I am un-encumbered by an NDA. Out here I can remain independent. In order to successfully be on the CSM, I cannot.

The CSM just isn't for me. It never has been. I understand that better today than I did before. I'm glad I ran. I'm proud of how I ran and of the points I managed to get across, especially when it comes to Factional Warfare. But I'm never going to do that again.

I'll be going back to being the Pirate Lord of Low Sec. Annoying blogger. Artist. And behind-the-scenes advocate for changes I believe in. I strongly believe I have the ability to affect change more in those roles than I would have on the CSM. I think history has proven that to be true. There are people who actually appreciate my independence and truthfulness.

As always thank you for reading this far. And for all of you who voted for me a very special thank you. I had a blast running and I enjoyed every minute of it. I wouldn't trade the experience for anything. And I learned a lot. Most of my assumptions proved to be true. Sadly.

We can build a better Eve Online. But it ain't gonna be easy.

Not all fights end in victory, but only if you choose to stop fighting.