The voting is now closed. We wait until Monday for the Live Stream to reveal the results. Until then, all we have is time to wait, consider our steps, and hope that the voters actually voted. Will the daily rewards drive up participation from the 36,000 that voted last year? Or will war-fatigue cause the numbers to drop? And what does either of those have to do with predicting the winners? Who knows. I'm not predicting anything. I'm just going to wait like everyone else and let this play out.

I wanted to run the kind of campaign that no one had ever seen before. And I think I managed to do that. I went full steam from day one and never stopped. I appeared on every show, podcast, twitch stream, and alliance teamspeak/discord I could. I wrote hundreds of in-game emails to my contacts who are still playing. I produced 7 campaign videos. I wrote daily slogans, like this one (which was never released): 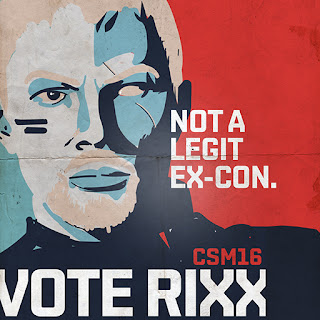 And yes, a lot of my material is self-deprecating, because I try to never take myself too seriously. I wanted to have fun, face the music of my own history (and own it), and put myself out there without apologies. And also be extremely positive. Which I did. And I am proud of that.

And it worked. I think. I decided to get the negative bits out of the way very early, within the first week, and someone from Brave was nice enough to take the bait and post my first article up on Reddit for me. Which brought out the usual trolls. But not many of them. That was a test to see how dedicated those trolls would be. Turned out - not much at all. Which is why I immediately wrote the "Elephant in the Room" post, which was read by about 35,000 people.

It turns out that being honest and telling consistent truth for years works. Which is all I have ever done. And I did the same during the campaign. I learned a lot. I got to meet and talk with old friends, make new friends, and explain myself to a lot of new players. It has been an incredible experience.

Now that the voting is finished I can tell you this. If I do not get elected to the CSM this year I won't be running again. This campaign was fun and all, but I can't imagine doing it again. It was a lot of work, time, and energy and I put everything into it. So yeah, if the players decide I'm not worthy of being on the CSM that's fine. I'll just go back to being Pirate Lord and annoying out here. I hope that doesn't come across the wrong way. I'm grateful for every single vote and I sincerely appreciate all the support I've gotten, but I have no interest in becoming a person that runs for CSM every year.

And yes, I may have picked the wrong year to run. But this was the first year I could. The field was crowded with good candidates and not-so-good candidates, and that probably means a bunch of voting blocks will get spread out. What that ultimately means will have to wait until next Monday. I'd prefer to win by a landslide with a clear mandate from the player base that CCP needs to address the issues with Faction Warfare and Low Sec immediately. So that I can take that mandate directly to them and get some good work done as soon as possible. That's what I'd like to happen.

I'd like to roll that in with significant Wormhole changes. I promised that I'd advocate for those as well. And I always keep my word.

Whatever happens I'm happy with the campaign I ran. I avoided any pitfalls, got my message out to as many people as I could, and had some fun along the way. A very special shout-out to my friends and fellow pilots in A Band Apart who have been amazing during this campaign, spreading the word across New Eden, and being supportive. Thank you.

And to everyone else who wrote, DM'd, supported, encouraged, and otherwise went to the polls on my behalf - thank you as well. I do sincerely appreciate each and every one of you. You might not believe it, but I truly do. I know that come Monday every vote represents someone (and their alts) who chose me over other candidates. And that means something. Something I won't forget.