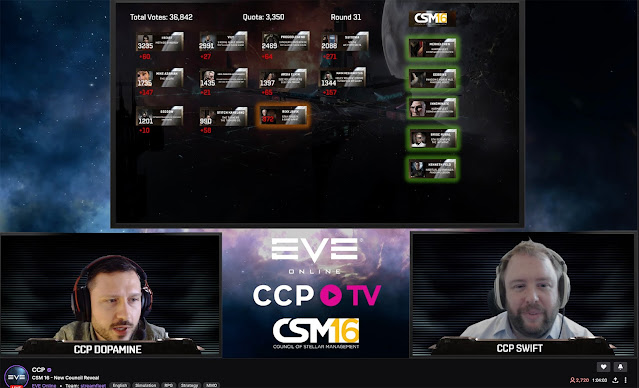 First of all, thank you to everyone who voted for me on your ballot. Wherever you placed my name, thank you for doing so. I sincerely appreciate it. A top 16 finish for a first year candidate is not bad. And I should be celebrating. But this is probably going to be my only shot at the CSM as I have no plans to run again next year. And to be frank, there isn't a lot to celebrate here.

Once again 8 of the 10 slots go to the same crowd as always. I literally see no independent victories, no WH representation, and no real path forward for Factional Warfare success anytime soon. While Suitonia made the final CSM he also appeared on a lot of NS recommended ballots and I remain concerned about his loyalty to LS. And Mike is a friend of mine and I respect him tremendously, but talk about an incumbent. No insult intended, but I would have preferred a new face instead. Both Suitonia and Mike are multiple time CSM members. We needed new blood and we didn't get any.

So here we go again. Eve continues to suffer, server numbers are down, FW and WH space remain on the back burner, and yet we continue to elect the same group of people year after year. I'm sorry, I really do appreciate the support I got, but it just wasn't enough to make a difference.

For our part we had to many Low Sec candidates this year. The vast majority of votes were wasted among four to five candidates, spread out, and ultimately wasted. I'm frankly shocked that the meekest, most soft-spoken person among us got the most votes. I don't even know what to think about that. Someone who just became involved right before the election process. Good grief. Not someone who has years of experience fighting for what is best for Eve, for Low Sec, and for Faction Warfare?

I admit it, I'm stumped. I'm not a politician and I didn't play those games. I'm fiercely independent and that probably cost me in the end. But I'm not going to sacrifice my principals in order to serve. I'd much rather stay out here haunting the space lanes, providing content, and hammering away on my keyboard. So that is exactly what I will continue to do.

I hope that I'm wrong. And that the CSM will focus on much needed FW and WH changes this year. But I'm not going to hold my breath.