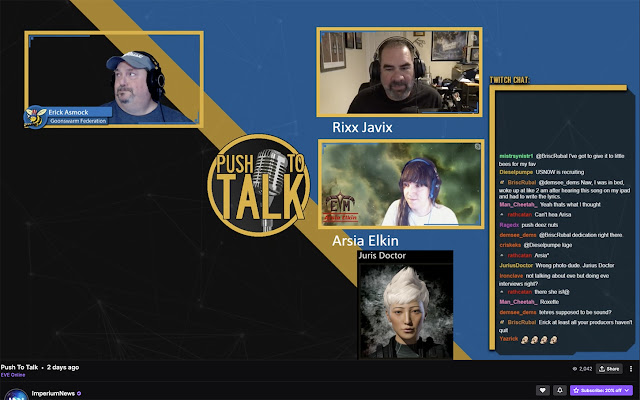 I announced I was running for CSM16 way back on April 16th, 53 days ago now. I know CCP has an "official" campaign period, but for those of us running for the first time or without major block support, our campaigns start much earlier. They have to. I'd prefer a different system frankly, but this is the one we have. While we are on that subject, I'd also prefer designated slots for various aspects of the game. But that is a topic for more discussion later.

Saturday I was a guest on Push To Talk over on INN's Twitch stream (which I am proud to say, I am still banned from btw) and spent a very pleasant couple of hours talking about Eve Online, the CSM, and other topics like food. This was a very relaxed session and I enjoyed it tremendously. This was my first chance to interact with Arsia Elkin, who I don't really know much about to be honest. And Jurius Doctor, who I have known for a very long time. Heck, the host Erick Asmock has been to my house for Steel City Eve. He only lives about 25 minutes from me.

And then yesterday I spent another couple of hours with the folks over at Declarations of War with Brisc Rubal, Teddy Gbyc, and Suitonia. The episode isn't available as I write this, but when it is it'll be at this link. Also a good time, with lots of open discussion about various issues that need to be addressed. The folks over at DoW do a great job and I've been on the show before, but it has been a long time. I had a great time and enjoyed it very much.

Afterwards I was honored to be included on Ashy's Official CSM Ballot. 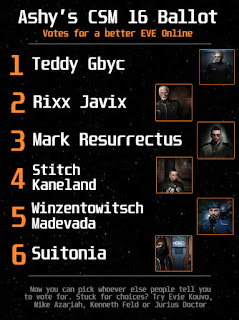 That is, obviously, a very WH centric ballot. I can't argue with any of the choices, we need WH representation. And several of those candidates also appear on my ballot. Although mine is certainly a more Low Sec centric ballot, as you would expect.

No one knows what might happen this election. But we are all aware of the challenges WH candidates face, challenges that are unique to that play-style when it comes to uniting behind one candidate. If the worst happens and we are without a specific WH candidate on the CSM once again. And I am fortunate enough to be elected - I pledge to do all I can to listen to and advocate for WH players on the CSM. I use WH all the time and we've had WH corporations in A Band Apart before. In fact, we currently operate a WH ourselves. I feel the same about WH as I do about FW, it has been far too long since they have been specifically addressed. And that needs to change.

And there you have it. 53 days of campaigning. 7 campaign videos. Wallpapers. Posters. Jita undock take-overs. Memes. I even found time to do this. A dozen or more interviews, podcasts, streams, and Alliance TS/Discord servers later. I have no idea how things will go after tomorrow. Which is both incredibly exciting and incredibly humbling.

As always, if is up to the player base now. When I started this campaign I promised myself I wouldn't hold anything back, I would run it full steam, take the hits and punches, stand tall, tell my story, and then let the players decide. With no regrets. That is how I've done things since I first logged into this crazy game way back in 2008. And I'm not going to stop now.

Be sure to vote. I'd appreciate your support. As always.