What Is Wrong with Eve? 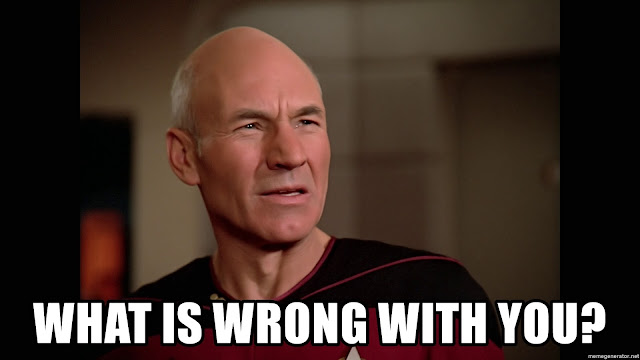 Spend any time on Eve Reddit or on the forums and you'd be hard pressed to understand why anyone actually plays Eve Online. Constant salt, un-subbing, complaining, whining, bitching and some old players who quit years ago hanging around to remind everyone of why they quit playing in the first place. It is, quite honestly, a cesspool of anger. But why? What is it about Eve Online that engenders such reactions, and has consistently done so for almost two solid decades?

What the hell is wrong with Eve Online?

First of all there are a few extremely common misconceptions that allow this environment to thrive. One of the biggest of these is the assumption that rules changes mean anything. Let me explain what I mean. So much of the anger and vitriol that springs forth on-line is based around a faulty argument perpetuated by a very vocal and determined base of certain players that don't seem to grasp basic game mechanics. And here is the wisdom I'll share with you today (this could change your life) - As long as the rules apply to all players, the rules don't matter. And in Eve, so far, all rules apply to all players. Always have. Once back during the Summer of Rage (Incarna) that was almost not true, but us players helped CCP stepped back from that edge.

This isn't to say that game balance isn't important, because of course it is. But essentially all the whining about this new thing, or that old thing, or which ship gets which bonus is ridiculous. We all play in the same server, in the same universe. As long as changes apply equally, it affects us all across the board. It might not impact us all in the same way, obviously, but Eve is a connected ecosystem. Which leads to another monumental revelation - no play-style has ever been destroyed by CCP. Like ever. Players destroy certain things by changing the way certain things are done inside of Eve. CCP doesn't do that, we do. Players will yell and scream that CCP is or has destroyed their special little way of playing the game, but they are usually just being dramatic. Because that rarely actually happens. (Granted, read the next paragraph.)

Things do change. They have been changing since day one and they will, hopefully, continue to change. At one point we couldn't warp directly to gates in Eve. Did you know that? Imagine how screwed up that was. But it changed. I suppose those dudes who made ISK selling bookmarks at zero got pretty angry when that happened. I bet a few of them quit over it. But funny enough, some of them still hang out on Reddit.

Quitting Eve is so messed up. I've never seen anything else like it. Quitting is so messed up in Eve that many people call it "winning" Eve when a player quits. But they don't go away, or go find something else to do. Sadly they continue to hang around to remind us all, over and over again, of why they quit and why that was a smart decision. Cause otherwise they'd seem dumb. Remember me? They seem to not want to be forgotten. This is just messed up. For goodness sake, go find something else to do.

Another misconception regards the role that Devs play in our game. Devs are awesome people that want to make a great game, they work hard, and they try the best they can to listen. Imagine having 500k angry people bitching at you all day! They aren't out to destroy you, or hurt you, or steal your precious industrial planet supply chains. Really, they aren't. CCP and the Devs that work there are simply custodians of a sandbox in which we play. They are trying to keep things interesting, enjoyable, and profitable for the company so they can still have a job. And feed their families. Send their kid to school. Y'know, just like you.

Eve is amazing and it creates a lot of passions. I get that. I've been here a long time. I care as much as anyone. And it's ok to get angry sometimes. But this is a game. We're talking about pixels. Someday all of this will look silly to someone. Very, very silly. Trust me, back in the '70s all those people genuinely thought they looked good in those clothes.

But a lot of players think about Eve wrong. And that causes a tremendous amount of problems. Mostly for them. And then they get frustrated. The important thing is to think about Eve the right way, understand how it actually works, what your role in it is, and how best to manipulate those situations for your own benefit. That is what the master level players are doing all around you, right now. Us veterans who have lasted grasped these fundamental truths long ago. And until you do, you won't progress. You'll end up all quitter and yelling nonsense on a forum page somewhere.

And no one wants to see that happen.

PS: Just to be clear. Not ALL players who quit the game qualify under these conditions, obviously. Heck half the people I consider friends in the Eve community no longer play the game. They don't all hang out and complain, or shove their quit in our faces. In fact these legions of former players still staying involved is a GOOD thing. It continues to show the passion that Eve Online generates in its player base.

I thought it was obvious I was speaking about a very select group here. But I do often take things for granted, especially when it comes to my intentions.