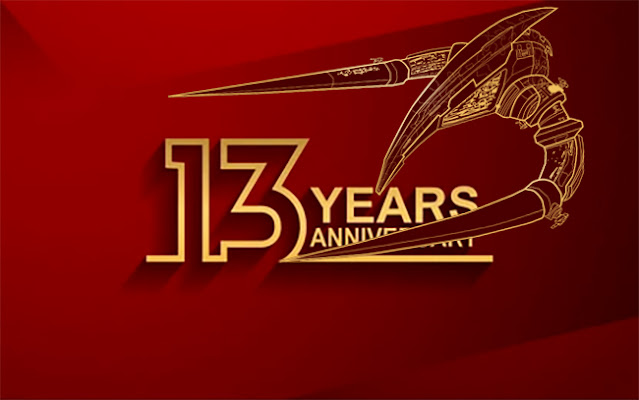 13 years ago today I started playing Eve Online. I had no intent or expectation that it would last this long. Back then Eve was just another game I could play with my Son. We were both trying to find our way together after a divorce and video games had always been one of those things we shared together. Eve was no different. It gave us something to talk about, discuss, and plan. Something we could share. And for those first three years I essentially just followed him around New Eden and honestly, didn't give Eve much thought. My life was very complicated back then.

And then I started writing this journal/magazine back in 2010. And then in 2015 I traveled to Iceland and met my very first Eve players in real life. I went seven years in this game before meeting anyone other than my own Son who played Eve Online. I've been to Iceland five times now, Amsterdam, Toronto, Alaska, Vegas and I've had players at my home four times for Steel City Eve. Crazy. And I haven't even mentioned the art, logos, memes, videos, alliance tournaments, events, FFAs, Stay Frosty, A Band Apart, or any of a hundred other things I could mention. The last 13 years have been nuts.

I've talked about all of this before and I won't belabor the point today. I'd like to instead talk briefly about something that doesn't get mentioned enough - regrets. I have more than a few. I regret not taking Eve more seriously those first formative years. I can't go back, but if I could I would have done many things differently. A lot of pre-conceived notions about me propagated during those years that I wish I could mitigate now. I regret those. And just to be clear here, these are small regrets. Decisions that nag at you, words said you wish you could take back, things you would have done differently if you had a second chance. The results might have very well been the same, but maybe things could have been handled differently.

Unlike many players who came to Eve in their young age, I came to Eve already in my forties. I had a business to run at the time. And a huge, life-changing event going on around me. And a new life I was trying desperately to build for my family. I freely admit that those events drastically overshadowed whatever I happened to be doing in a virtual world at the time. Naturally so. What I didn't realize then and what I have come to realize in the years since - is that this world (our community, our players, our game) is just as real as any other. I've built real friendships here, bonds that will last a lifetime. And forged adventures both in-game and out, that have real meaning.

I can't quite explain why I've stayed so long and why I intend to keep going. Whenever I stop and really think about it, it can often feel rather silly. And, especially these past two years, ephemeral. And then I log in, undock, and everything comes back again. And it all makes sense. Eve is a true wonder. And while I don't expect every player will experience the game, or the community, or anything else the way I have - I can only continue to encourage you to try.

So much has changed in these last 13 years. My Son is grown and married. Another has graduated. And two more are almost ready to finish High School. I have a great new job and life is pretty damn great. And fairly, weirdly, and unexpectedly, I have to give Eve some of the credit for that. This crazy game has opened up a new world, both virtual and real, that has kept me energized, creative, and grounded during the past decade plus. And in some instances, literally saved my ass. More than once.

13 years ago I started playing Eve Online and my life has never been the same.