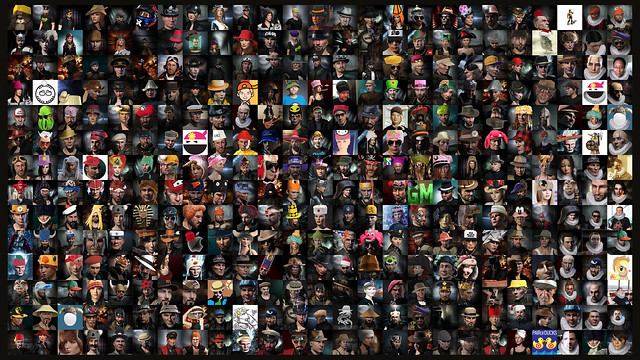 I started putting hats on Tweetfleet avatars on Twitter ten years ago during the Summer of Incarna. Ten years ago today I released the first wallpaper collection, which included 150 avatars. The one you see above was done a few years later. As of last count I have be-hatted upwards of 500+ avatars. And before you ask, I don't do them anymore.
Why you might ask? Well, for one thing, we have hats in game now. For you younger players this might not seem like a big deal. But it wasn't that long ago that the idea of hats on avatars was seen as an impossibility, officially from CCP. Wasn't possible. Forget about it. Can't happen. Which we all understand is just a lazy technology excuse. Because hats are possible. Obviously. Duh.
Now when I look at this image I don't think about hats. It makes me remember what a vital, engaged, and wonderful place Tweetfleet used to be. Not that it is bad now, only that it has changed over the years. As all things do. I've been noticing the changes for the last few years as more and more players have left the service or moved on to other things. Don't get me wrong here, Tweetfleet is still awesome and a great way to stay in touch with the Eve community. But these days it is more about "announcing" things than it is about engagement, feedback, and discussion. Which is pretty representative of social media platforms in general, isn't it?
Everything changes. And the longer you stick around the more obvious those changes become. One day it is impossible to put a hat on your character, the next you have lots of hat choices. Ten years ago the Tornado was introduced to the game, along with its brothers. Ten years ago CCP laid off about 20% of its workforce and the Eve community was certain Eve might be dying... ok, some things never change.
Heck ten years ago the Eve blogosphere was a humming, vital, glorious place and I couldn't write a post without getting comments. Now, there are just a few of us left and comments are rare. These days I mostly write into the void. The data says people are reading, visiting, spending time here, but I dunno. Maybe I should become a Streamer? Or maybe I'll start the Podcast back up again, now that certain people are out of the picture? Or maybe I'll just keep writing words and keep the blogosphere corner of the Eve community alive. Someone should. If only to keep reminding people of where we've been and the struggle it took to get here.
Maybe that's enough.
History ramble Twitter Hats