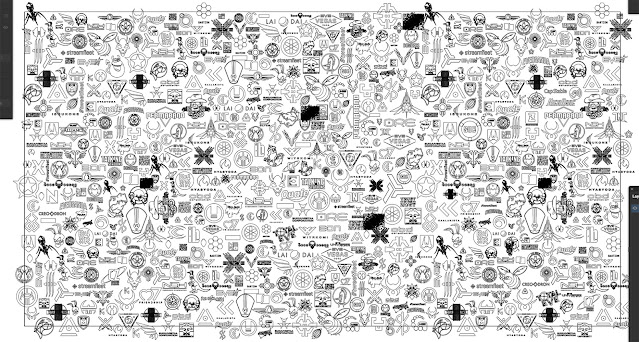 What you are seeing in the banner image is the original Adobe Illustrator file where I built the "wall of logos" for the new Community Beat branding. I wanted to briefly spend a minute explaining a few things about the construction of this project, to help clear up some questions I've received about it. First of all my intention here was to provide as diverse, representative, and inclusive a group of community logos as possible. But certainly not an all-inclusive version (which would literally be thousands and thousands of logos!).

But I had limitations I had to work under. I had no way of knowing, while I was working on the project, what final resolutions the end-result would be needed. So, in order to hedge my bets, I made a master logo file in Adobe Illustrator which is resolution independent. But that meant that all the logos needed to be in a vector format. Which meant pulling files from my Eve Art Library Collection and files that CCP has shared with me over the years. So I used only those files that I could obtain in a vector format. That's one reason why there are so many NPC logos, since I literally have all of those (having recently created even more for the new Clear Skies project.).

I knew this would mean the logos would seriously lean into those that I had personally designed. But I did try to not have that happen. Although my name, Rixx Javix, is the only player name in that group - I thought that was only fair since I was, after all, the designer.

I would literally stare at this thing and wonder what I was missing. At one point it was podcasts, so I added more of those. Then it was history, so I added EON and other historical entities to the mix. Then it was wormholes, so I added a few more WH groups. Then it was player meets, and I added Eve North and Eve New Orleans and Eve Vegas. And this went on and on like that right up until the very minute I sent the final files to CCP. At the last minute I added The Imperium logo (which is the only non-vector format logo on the piece), if you look at the image above you won't find it.

Believe me, I know it is disappointing to look and not find your groups logo up there. But I hope that you can find something among all those logos that speaks to you. And appreciate the constraints I was working under and the ultimate goal here - which was art.

I believe the piece speaks to our community, the diversity, the depth, and the creativity. I hope you agree.