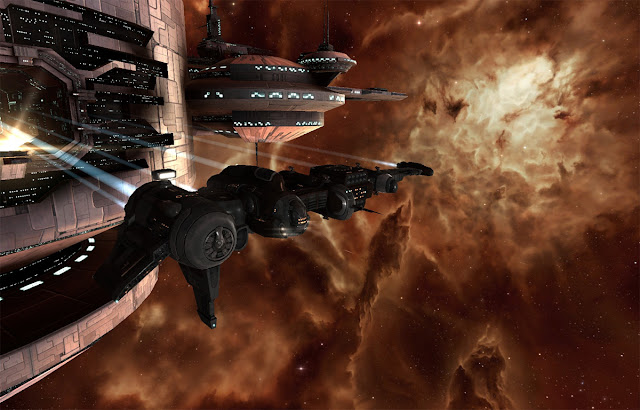 The endless debate. For as long as I have been playing Eve Online the debate over non-consensual PvP has raged. In fact, I choose the above image based on a post I found from 2008. Back in January 2012 I wrote a piece called "Your Ship is Out of Control" as part of a Blog Banter. So this topic has been around since the beginning of Eve Online. So what new can I add to this pile of words?

I'd like to point you towards a post written by then CCP Manifest from the same Blog Banter.

Personally I think this debate, like so many debates in Eve, is rather silly and obvious. And I'd like to explain why I believe that is the case. As CCP Manifest put it so well in his post, the danger of Eve is the spark that brings everything else after it. What he didn't know back in 2012 is that a purely consensual form of PvP would be introduced into Eve Online - and that is the Abyssal Arena Proving Grounds. And as anyone who has attempted to play those knows - nothing comes from it. They are hollow. The losses are losses and the victories mean nothing but a slight sense of accomplishment reflected in a leaderboard. No Alliances spring forth, no long-term friendships (probably), and nothing impacts the larger universe of Eve. (PS: I'm not against the Proving Grounds btw. I like them, but for the most part I don't participate in them. They're just not for me)

Eve has lasted as long as it has because there is no safety net. No place where you can be entirely confident, no place (other than docked) where you can totally relax. Having said that, if you pay attention, learn the rules, and want to avoid danger - it isn't impossible to do so. For the most part.

Let me give you an example. I've had a transportation alt for over a decade now, she is the one that moves my supplies back and forth in High Sec. Over the years she has moved me from one end of the map to the other, Null Sec, Wormholes, Low Sec, and everywhere in-between. Literally thousands of trips. Often with a Freighter full of stuff. In all those years she has lost exactly ONE Freighter back in 2017. 8 losses all together. Why, because I know what I'm doing and I take as few chances as possible. In fact, I lost that one Freighter because on that trip I didn't follow my own rules and took a stupid chance that got me killed. The other losses are the usual stuff and those happen from time to time. But in over a decade I lost ONCE. Over 12 years.

Look, I understand that some people want HS to be safer. And I do understand that loss is tough, gankers can be annoying, and that often it can feel like the universe is against you. But making HS safer is not the answer. In fact, it would kill Eve Online. Half the universe would bottle up inside of HS and the rest of us would log off. And if you think that would be a fun and sustainable game, you are mistaken.

Everything that happens in Eve springs from danger. Alliances, scouts, corporations, discord channels, bookmarks, probes, wars, battles, stories, shared experiences that unite us all under the umbrella of a shared history. Even gankers. Even gate camps. I just shared a story about my Freighter alt that happened FIVE years ago now. I can still remember the details of that incident, still remember why I took that chance, what I did wrong, and I obviously learned a lot from it - because it hasn't happened again.

But it might. And that knowledge keeps me sharp. Eve is a dangerous place. It has to be.

Otherwise it's nothing more than a screensaver.

You accept that risk when you log-in and you participate in that grand narrative when you undock. Like it or not.