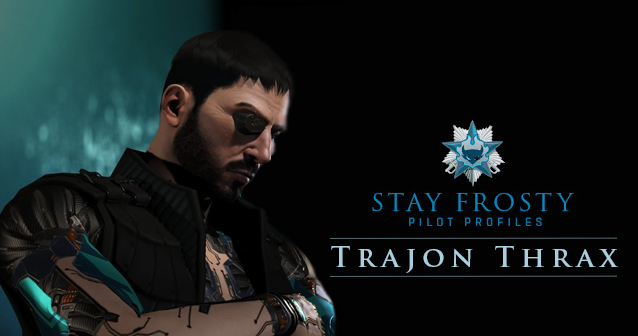 When you've been playing Eve as long as I have you can't help but notice the cycles, trends, and waves that carry the narrative of our sandbox forward. Players come and players go, some get attached for awhile and some glimmer in the darkness and never really step forward. And hundreds of iterations in-between. But, every so often, someone comes along that you know will have a bright future. When Trajon joined Stay Frosty he immediately became someone to watch. Enthusiastic, willing to learn, eager to help, and unafraid of failure - it was apparent to all of us that despite his youth - he had what it takes.

How did you get started in Eve Online?

I read the book Armada by Ernest Cline.  I’m probably one of ten people who really loved that book.  The hero played an online video game flying spaceships.  When I was done reading it, I googled MMO games.  EVE was at the top of the list.  The more I read about EVE, the more intrigued I became.  I gave it a try. I had never played a video game on a computer before.  I quit playing after a few weeks.  Then the pandemic hit and I came back.  The rest is history.

How did you get into Piracy?

I was in Eve University for quite some time. It got to the point where I was running incursions full time and making a lot of isk. I knew I was losing a lot of isk in corporate taxes though. I wanted to find a tax shelter corporation. This led me to looking at a lot of corporations ads. I knew Stay Frosty were pirates next door to the UNI’s high sec campus and was always leery of them even though they had a good reputation with the Unistas. I didn’t view them as tax shelter material, but for some reason I decided to look at their corporate ad. The ad led me to a link to EVEOGANDA.  As I read about Rixx's vision of Stay Frosty I knew that was exactly what I had been looking for. SF doesn’t care how you play the game, as long as you follow a few simple rules. Honor your word and don’t be a dick.

So, I applied. I truly believed I would keep flying incursions under the SF banner. After a focus ended, I came to Ouelletta to check it out. I asked if someone could share a fit they really liked. Several guys gave me some fits. First, I was shocked at how cool the fits were. Second, I could tell right away that all these guys were extremely laid back and cool and really damn good. I never left. The next thing I knew I was a -10 pirate in the best pirate corp in New Eden.

What is your favorite thing to do in Eve?

This is a tough question for me because I do a lot of stuff.  I really dig frigate PvP and I probably do that the most. In the beginning I really struggled at it to the point of almost giving up on it. But, Darkon reached out to me and in all essence became my mentor.  He gave me his Condor fit, but more importantly, taught me how to fly it.  He taught me how to engage different targets and different tactics. It was a game changer.  I have over 600 kills in the 280 days I have been in SF now. I’m getting close to 1000 total which is my current goal.  I also enjoy cloaky hunting explorers. I have been doing that since I joined SF.  I was an explorer for a long time and I use my knowledge plus Daniel’s techniques to catch them. That’s super fun. I won’t list all the other things I do too. That’s a long list.

What is it you enjoy most about Stay Frosty?

The people. Everyone is so talented at what they do. We have so many experts in so many areas and none of them are arrogant about it. They will bend over backwards to help you and teach you. Grab T Sky’s Frigate Yearbook and see how many SF guys are the all time leaders in certain hulls. Show me someone else who has 500 killmarks on a hull of a ship that is still flying. And, none of them are dicks about it!

Instead, they kill dudes and then teach them what they did right or wrong after the gf’s. They take guys like me under their wings and teach them how to become better pilots. We have AMAZING people.  I am humbled and thankful that I get to be around them every day.

What else should people know about you?

I’m not a role player guy, but I dig the lore of EVE.  I have a degree in History and I always like to know how things were.  This has led me to really get into the study of EVE history, both lore and Player created history. If someone starts to talk about playing 10 or 15 years ago, I can listen to them talk all day.  I have also read The Empyrean Age and a lot of the Chronicles. There are so many layers in this game. It’s just one more reason why I think this game is so great.

I really enjoy hearing from young players that only recently joined our band of Pirates because it gives me hope that the future remains bright, pride in the world we have built and the people that fly with us, and that it continues to live and grow every single day. Perhaps, much like Trajon, you are still searching for the place you belong inside of Eve. Maybe you've never really considered a life of Yarrr and adventure? Maybe, just maybe, it is time for you to hop the fence and become one of us?

Who knows, maybe someday I'll be writing about your adventures in these pages?