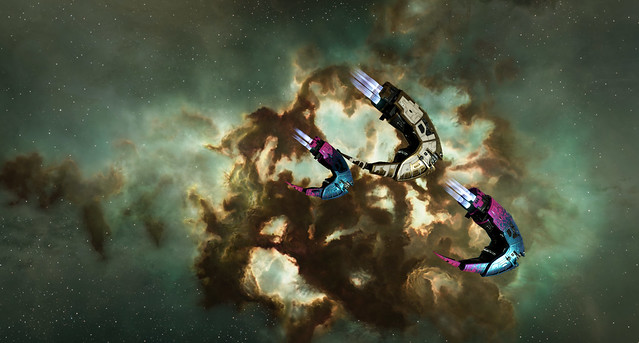 I used to post fits and advice about how to fly certain ships and just realized that I stopped doing that for a variety of reasons. One, fits and modules and whatnot change so often that older posts often become outdated rather quickly. Two, everyone has their own way of fitting ships and not everyone flies the same way in Eve. Fits can be rather personal. And yet, some of the most popular posts on Eveoganda over the years have been those about ships and fitting advice. My first week post about the Garmur back in 2014 remains one of the most popular posts ever, right behind the ones about the Federation Navy Comet.

Look, I'm no lore expert. I don't run missions. I don't stream. I don't do anything in Eve except combat, every day, all the time. If there is one thing about Eve that I am extremely good at it is solo and small gang combat - and fitting ships. (Except for armor Rattlesnakes. I suck at that. Insert old Alliance Tournament open joke here.) I do often fit ships just to see how they work, or to fulfill a certain task, or to test out a new module, or to do whatever the heck I want to do. I use Pyfa every single day, but I also firmly believe in testing things in space under duress. Theory is great, but I prefer things that actually work.

I also enjoy flying ships that no one else seems to fly. Which is why I recently started flying the Shrimp. I fooled around with several test fits and finally landed on one I liked which garnered 17 killmarks before she finally exploded. I will tell you that she died while fighting a Hecate so she has nothing to be ashamed of. Why was I fighting a Hecate in a Tormentor? You might as well ask me, why do anything in Eve?

So let's review the fit shall we?

We start with 3 Small Focused Beam Lasers in the top. Torms are very, very slow ships and you will often get ranged on by faster ships, so having some range on those guns is going to be very, very useful. Please be advised that target selection is extremely important in this ship, as it is with all ships.

The mids are an AB and two Webs. You can go with a Scram and a Web, but with three mid-slots I highly recommend the second web. Not having a scram means some targets will wise up, pull range, and simply fly away. This does happen. But, you'd be surprised how often it doesn't. You need two webs. You could also use a wingman.

The lows are pretty obvious. A Heat Sink, a DC, a Small Ancillary Rep, and a Multi-Coating. At this point fitting is getting very tight, so choose your modules carefully. You may be tempted to fit faction mods but I would advise against it, the ship is not worth the extra expense. You get caught against the wrong target and you die.

For rigs I choose to fit Kinetic and Thermal Reinforcers T1 and spend the T2 rig on a Collision Accelerator. Your choices may vary.

You also get drones. I suggest Warriors or Acolytes for speed.

So why this fit? Well this is a very aggressive fit for this little ship and that is how I fly. Others may prefer a more defensive style, or a bait-oriented approach. Nothing wrong with that, simply swap out the beams for pulses and add a scram, which will impact other mods in the fit obviously, but it can be done. You lose range control, but tbh even with the beams fitted in the above your max dps range is still under 20k. Again, you can increase that with other mod choices, but then you are going to sacrifice other aspects of the fit. I tend towards balance myself.

To fly this ship successfully you can't simply lock target and orbit. It doesn't work like that. In fact, I don't recommend lock and orbit on any target, unless they are AFK or you live in Null :) (I'm kidding!) The beams track best when pointed at the enemy, so manually piloting is preferred. Swing and tilt is how I refer to it, keep your speed, swing around the enemy ship and then tilt around to face them, rinse and repeat. Don't stop to do it, or you'll die. Doing this while keeping your speed up is tough, but it is an awesome way to fly. This approach works well in Rail Gun and Arty fitted ships operating at close range as well.

The Tormentor is a cheap ship that I find a lot of fun to fly. No one expects much out of it and that is the entire point.

Look at your hangar and pick a ship you rarely see in space, fit one up and go have fun with it. That's what I do! YARRR!