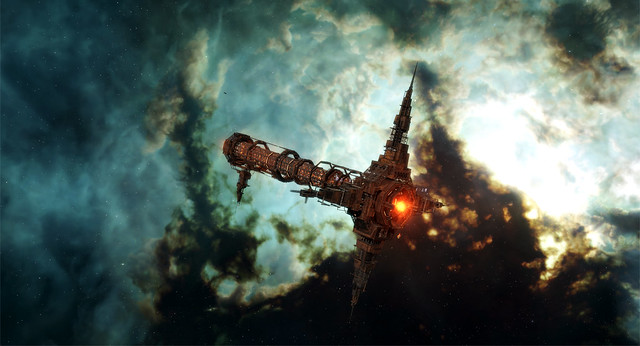 One of my first posts was called "Why Do I Love Eve?" way back in 2010. At that point I had only been playing Eve for about a year and a half. My focus in that post was to try and express the reasons why Eve had grabbed me and held on, the things I saw, the feelings I felt, and the reasons I kept playing. My perspective back then was limited. I had no idea when I wrote those words what was ahead of me.
Over the years that have followed I've read hundreds and hundreds of angry, vindictive, rage filled posts aimed at the game I love and those that have built it. And each and every time I've felt like an outsider to that experience, a foreigner in a strange land. My own experiences with Eve are so far outside of that world-view that I often feel as if I must be playing a completely different game. And yet I am not. Facebook, Reddit, and other platforms are full of people yelling, screaming, and pontificating about the horror that is Eve Online - and here I sit every single day thinking that Eve is better now than it has ever been before.
There is no doubt, at least in my mind, that the Eve we are playing today is the best version of Eve that has ever existed. It isn't even close. We have Wormholes, Thera, Phochven, Faction Warfare, T3 Cruisers, Drifters, Edencom, Triglavians, and more potential content than we have ever had. We can build our own stations. Today more ships are actually useful than at any other point in our history. We don't have a few OP choices when it comes to ship choice now, we have dozens. Eve has never, ever, looked as good as it does today. It looks insanely good. Look at that screenshot I took yesterday in Null Sec, I haven't touched that, it is straight out of the game.
I could go on and on. I could easily list a hundred reasons why Eve is better now than it has ever been. Easily. And yet someone reading these words is already angry at me. Already thinking I've lost my mind and don't understand the chip that is sitting on their shoulder. Thing is, of course I do. I have them as well. I want things to be better, just as much as you do. I strongly and passionately believe what CCP has done with many game mechanics is a crime. Don't even get me started on FW. Or Low Sec. Or declining server numbers. Heck, we can all sit around a campfire and complain all day about the crap that needs fixed. We'll do a lot of that next week at Fanfest. Don't presume that my love for Eve is blind. Because it is certainly not.
Eve is not perfect. I would never claim such a thing. It will never be perfect. You might not like it and that is totally your choice. I don't like it either. I love it. And I have since the day I first logged in and got lost in Todaki. And I have a lot of reasons to hate Eve. More than most to be honest. And yet I chose not to. Because of the community. Because of the people I fly with. Because of my friends. Because I find each day challenging, competitive, and complex. Because I have made friends with those that have built the game, or used to work there. Because I find Eve beautiful. Engaging. And full of promise. Because I enjoy it. Even now, almost 14 years later.
I am not trying to invalidate your own experience with Eve. I would never do that. We are all different. I appreciate the fact that some people are going to have bad experiences with the game and that their time in Eve will be much, much different than my own. That is just the reality.
The big thing that changed for me during the last 14 years was connection. Connecting to the wider community, to the experience in-game, building my own community inside of the game, and expanding my tolerance beyond my own limited perspective. I can't recommend that enough. Eve is a social game, even for solo players. In Stay Frosty we talk about "solo together" as one of our own guiding principles. Even though we all fly solo a lot, we also do so together in Wolfpaks, fleets, and other ways to help support each other. That is, in my opinion, critical.
Why Do I Love Eve? Let me count the ways. I'm still having fun playing this internet spaceship game and I'll keep playing it until it stops being fun. If you aren't having fun playing Eve then perhaps it just isn't for you? Or perhaps you need to stop being so negative, find a good group of people who share your interests and make some friends. Stop trying to do it all yourself. Or put pressure on yourself to achieve something meaningless. Or fall into the rampant traps this community often sets up for young players to fall into. The myths about you needing multiple accounts for example - you don't. I could list a dozen others, but that is another post.
Eve is a sandbox. CCP is not going to save your game. Only you can do that. I know some of you aren't going to like them apples, but that is just the fact. Stop blaming them for your problems. Find solutions, work arounds, adapt or die. Sink or swim. That is, after all, what a sandbox is all about. Only the strong survive after all.
Much like life itself. Funny huh?
CCP Eve Eveoganda History Opinion