A Tale of Two Fights 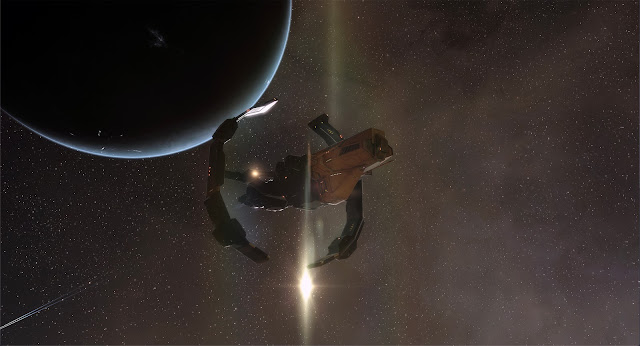 Yesterday I had a total of two fights. Later in the day Angor and I caught an Algos, but for the sake of this story I'm ignoring that one. Two fights. And they were both glorious. See? You thought I was going to complain, didn't you? It was a lazy day and I was out looking for quality engagements for my little Astero.  I took a break from flying one for the past few months and finally decided to fit one up again. I do try not to be overly reliant on a single ship.

When I arrived in Hevrice there were three ships on scan, each in a different location. Two were in Plex and one, an Executioner, was flying all over the place. So I decided to wait a few minutes and see what was happening. That's when one of the Plex closed. And then the Executioner landed on the Plex I was watching with the Catalyst in it. The Executioner slid inside. That left a Cormorant somewhere in space. I figured his was the Plex that had closed. Sure enough the Corm also landed and started to slide. Shortly all three would be inside. And so would I.

I figured I'd kill the Catalyst first and then the others would run off. Sure enough the Corm pulled range as expected, which probably meant he was rail fit, so it would be the Catalyst first then. So a nice 3 versus 1 ensued. The trick for me in this fight was managing all the things I had on my plate. Keeping my drones fresh and alive (my only dps), managing my ranges with three ships shooting me, and keeping two armor reps running while burning through cap charges. I was also using my web for defense to hold the executioner. And then the Catalyst finally popped. It was down to two.

They didn't run away. Ok this is either really bad news or really good news. Turns out it was great news because I had already managed to catch the Executioner with my scram. Also, with the Cat gone, the incoming dps had dropped considerably. Which meant less rep management and less cap charges. I'd learn later that the Cat was the better fit of the bunch, but while in combat always treat every ship as if it were being flown by the world's greatest pilot. The Executioner popped. I have to give the Corm pilot his due, he had a chance to escape, but instead he stood his ground and fought. Heck, let's give them all a shout-out for sticking around and putting up a good fight. The Cormorant also popped.

Been awhile since I had a solid 3v1 fight. Love these when they go my way. And before you go thinking I got out easy, I burned a rep, lost 3 Hobs, and churned thru 6 cap charges in that fight. Every single mod was in the red. I was also drug free by the way. Like I said, casual day.

Later in the day I'd run into a very similar situation up in Moclinamaud. Another Catalyst in a Plex but this time with a free-floating Kikimora around. Now Kikis are not great targets for my ship, I'm slow, they are fast, I'm a low dps ship and they are generally - annoyingly good. I tend to stay away from them. But the Kiki was already inside the plex when the Cat slid in. So I decided to slide in with the Cat, catch it at zero, and hope the Kiki would run away. I knew they were together because they were talking in local. I appreciated the extra intel.

Sure enough I landed on the Catalyst and he hurt a lot. I knew right away I had to pull range and survive long enough for him to die. The Kiki came in and started being annoying as my armor dipped dangerously low. A quick web hit on the Kiki and some drones in his face forced him to pull range. I could focus on the Catalyst again. The Kiki didn't just pull range however, he warped off. In local however he told the other pilot he'd be right back to help. The Catalyst exploded.

The Kiki was back on short range and I burned back to the beacon. If I can catch him at close range and get a scram, web, and neut on him I have a chance. Sure enough the Kiki landed on me and I had him. He didn't last long.

If you ever find yourself wondering why someone would continue to play a video game like Eve Online for almost fourteen years, please refer to the above post. It is days like that, engagements like that, and complicated, insane, game mechanics like that, that keep me playing. There is just nothing else like it.