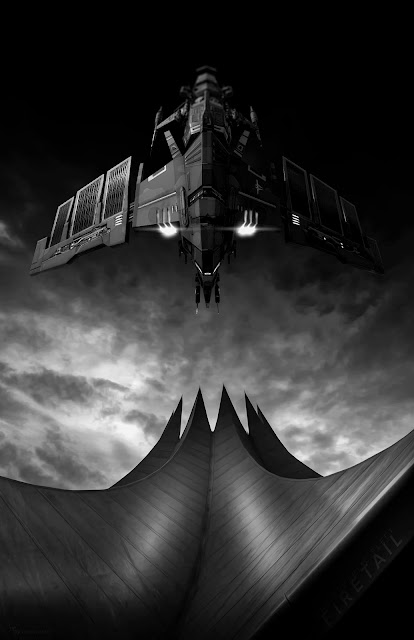 In yesterday's post I spoke about mistakes that happen in-game. How those mistakes are universal, we all make them, and how we should accept them - learn from them - and grow as players. This is not only true in-game but out here in real life as well. You are going to make mistakes. And I'm not going to spend an entire post talking about that, this is well trodden ground. There are entire books written about the subject. Make mistakes, learn, get better. That's the TL;DR version.

Instead I'd like to share my own experiences when it comes to Eve Online. I've made more than my fair share of mistakes out of game over the years. Some of which I still feel bad about even today. But I think it is important to set some background before we dive into the juicy center. I had never played an MMO before Eve Online (and still haven't played another one) and I wasn't sure what I was getting myself into. Back in 2008 I ran a very public business and was already involved in a very messy and complicated divorce. My initial reaction to Eve was to remain strictly anonymous. Even when I started this blog back in 2010 my desire for anonymity was paramount. So those early days were focused primarily on playing the game when I could and learning more about how the community worked.

But Eve was not a priority for me back then. Over the years that started to change. I started slowly pulling back the curtain and merging both my in-game persona and my real life into one. That took a long time, it wasn't until 2015 that I finally met another Eve player in real life. At Fanfest in 2015, which was a huge turning point in how I approached the outside world of Eve. At that point both of us became one person. And since then, things have been much easier.

But doing that also came with consequences. Back then my real life was extremely complicated. And this caused some major misunderstandings within the community. People got things mixed up and accused me of all sorts of things I wasn't actually doing. In some corners of the Eve community those accusations still persist. For example, the Mittani still has me blocked on Twitter. My mistake back then was engaging with those elements and trying to explain my actions. Instead of engaging I should have ignored them. But I wasn't in the proper head space and I felt I needed to defend myself. This is over-simplifying a complex series of events, but essentially I freely admit to making mistakes. I wish I had handled some things better.

I don't bring this up to rehash the past, only to make a point. I've been playing Eve for almost 14 years now and that is a significant chunk of life. I'm not the person I was fourteen years ago. Imagine yourself back then, heck some of you reading these words might have been in grade school back then. We all change, grow, learn, and live our lives as best we can. And I am certainly no exception. And neither are you.

For me Eve only started making sense once I started meeting other players in real life. Once the concept of "community" actually started being a community. A real and substantial network of friends. People with whom you share a common interest certainly, but more than that. Real people with real lives. That's when Eve started to make sense, the outside version of the game. And we can call it the Friendship Engine, or whatever moniker sounds good in PR releases - but the truth is the truth.

The thing that drew me into Eve in the first place was that the spaceships I saw in space were being flown by other people. Other players. That concept was purely conceptual when I started playing back in 2008. But now it is reality to me every single day both inside the game and outside of the game. And that realization has significantly evolved and changed the way I approach my time both in-game and out-of-game. My perspective is much different now.

I've made my share of mistakes. But more importantly, I own them, I learned from them, and they changed me. I hope those words inspire you and challenge you and the way you approach this shared universe of ours. I hope you see things differently as well. Even if you've never met another player in real life, always remember they are there. Behind those pixels.