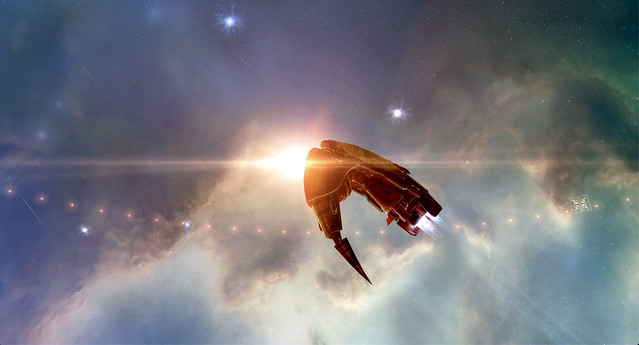 Yesterday I got so bored flying around in my Incursus that I purposefully sat inside a Novice plex and let a Dramiel attack me, just to have something to do. With predictable results. It wasn't that New Eden was boring, quite the opposite in fact New Eden was hoping yesterday in our neighborhood - but sometimes there just isn't much for a solo Incursus to get involved with. So I wasn't finding any fights. Tons of targets, just nothing for me to engage with. It happens. Why was I flying around in an Incursus in the first place? Well that is yet another extension of "How to keep yourself interested in a game you've been playing for almost 14 years" now.
I noticed recently that I have 23 ships with 100 or more kills. So I thought, you know what would be interesting? 100 ships with 100+ kills. That would be an interesting side-goal. Something to work towards in the down times between roams and fleets and tournaments, a little spice to keep things interesting. So the Incursus sits at 90 as of the last time zKill compiled. Which is why I was running around in it. I'll never be able to get the Police Skin Comet more than 53 kills sadly, since that ship doesn't exist anymore. But otherwise, why not?
These days I find myself setting these weird goals inside of Eve for myself. Small things, larger things, hard things and easier things - just to keep things interesting. And myself engaged. The other day I bought a Zinitra, not because I need one, but simply so I could have a new ship to look forward to in my hangar. And some new skills to train into. I'm even considering buying a Vehement for the same reasons.
Which brings up the entire question about why I continue to do what I do. When I started playing Eve I flew simply to learn, to figure out the game, to ask questions, to train, and to get better at PvP. Over the years I've gone thru several stages in that journey. Stages I'm guessing that many of us go through along the way. The "Deadly Serious" stage, the "Win Every Fight" stage, the "Killboard Means Nothing" stage, the "Killboard Means Something" stage and on and on. Eventually I settled into the stage I've been comfortably inhabiting for the past 4-5 years now, the "content creator elder statesman Pirate Lord" stage I guess. Hard to come up with a snappy title for that one. Individual wins and losses mean nothing to me, as long as the potential is there for a great fight. I don't mind losing an Incursus to a Dramiel when the potential for that Incursus to win that fight exists. Which it did. Briefly. These days I understand that my role is just as much about other people's game as it is my own game. My fellow Stay Frosty pilots and the larger Alliance as a whole depend on me to help generate content, lead roams, and instigate activities - and my presence in local does the same thing for other players.
It has taken a long time for me to become not only comfortable in those roles, but to properly understand them. It is one thing to say and yet another to embrace the reality of what they mean. And then the biggest trick of all - to enjoy it. This, for me, has been the biggest transformation in my own Eve career over the past 4-5 years. And why I've been enjoying my time inside the game so much more over that time.
So now what? More content. More explosions. More fun. That's the recipe. Call it whatever you want. I'm just having the time of my life.
Yarrr!!
Eve pirate RixxJavix