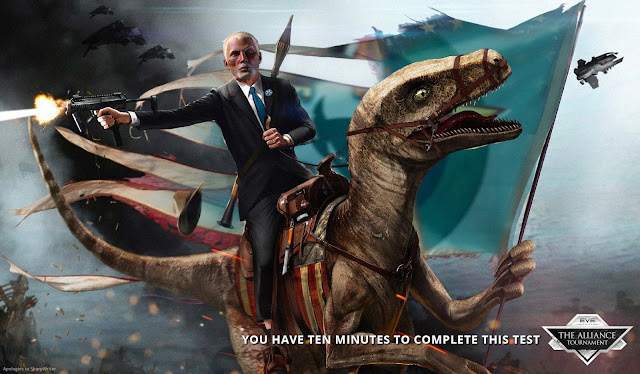 Yesterday I signed us up for yet another Alliance Tournament. I believe this will be my 7th Alliance Tournament. Our second match in this tournament, win or lose, will be the 25th AT match I've participated in as Team Captain for A Band Apart. There are probably a few players with more AT experience than me, but there can't be very many of them. Especially with just one team. We originally formed ABA as an alliance just so we could compete in the Alliance Tournament. In our six previous runs we've finished in the Top 16 twice, 11th place being our best run to date. We are 11-12 overall so far in our history. You can see videos of most of our matches and our full record on this page.

Last year did not go well for us. We lost both matches for the first time since our very first run in AT13. A combination of horrible bad luck on the initial draw - getting We Form Volta for our first match was not great for us - breaking in a bunch of new to the tournament pilots, and bringing the wrong comps to the wrong matches - didn't help things. To say it was discouraging is an understatement. But, on the other hand, these things happen and they do help to build experience and provide motivation for another go this year. I personally believe we have a much stronger team this year than we've had since that last great run. We came one match short of being in the final weekend back then. So I like our chances this year.

As Pirates in Eve Online we never give up. We get knocked down, yelled at, called names, and generally get looked down on by the bigger groups in the game. We're not a big shiny null sec alliance and we don't have the infrastructure and support teams they do. Or the resources. And we don't rely on Mercenaries to fill out our roster either. Every team member on the ABA team is an actual ABA pilot. That is the way we've always done it and the way we always will. Win or lose, it'll be our people doing the winning and losing.

So once more into the breach. Once more as underdogs with something to prove. With a massive chip on our shoulder. And we'll see what happens. A lot can happen once the matches start. Hopefully this year the chips will fall once more in our favor and we can get some momentum going early. I've seen what winning a few matches can do to a team and how it feels, how much it means when all the hard work actually translates into a win. After that, who knows what might happen?