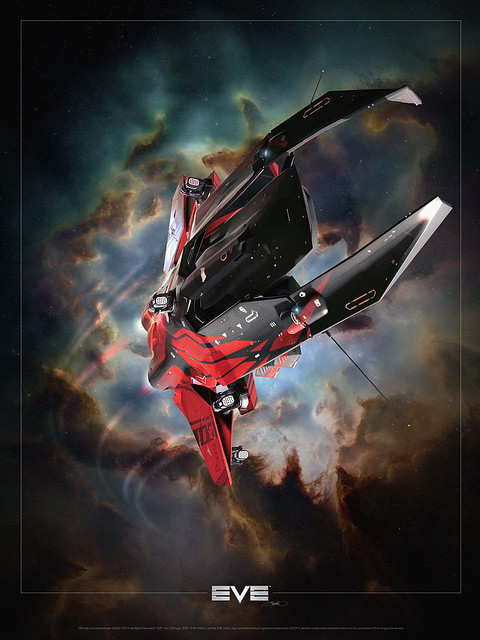 Yesterday I released this beautiful illustration of the vaunted and feared Garmur on my store for purchase - framed, un-framed and printed on aluminum. Enjoy!

Fellow Stay Frostian MacGybo has a new video up that you should check out. Some good suggestions here, although I must point out that once upon a time NPCs did in fact attack Null Sec structures and zero zero almost lost their minds over it. Blackout levels of yelling, screaming, threatening and proclamation quitting. (Proclamation Quitting is when you quit playing a video game and demand that everyone know why.) That didn't go well and CCP backed off on that scheme.
Null Sec complains about not having content and then does everything in their power to avoid having content. This is the reality of Eve Online's zero space residents. If they wanted they could have wars and fun content all the time, but they don't really want that. What they do enjoy is complaining about not having content, how it is CCP's fault they don't have content, and then quitting when anyone suggests otherwise. Anyway, I've written about this a lot and I don't want to write anymore about it today.
------------------
It is a wonder to me that I ever get any fights when I'm in Eve. The reactions I get are often hilarious, threatening, or a warning to all in local. With the new store and the promotion I've been doing to help support it, things have only gotten worse. This happens anytime your profile gets more attention than normal. It has always been a problem, but these things come in cycles and waves - whatever you want to call it.
Yesterday I did a quick 20 system loop and nearly half the systems resulted in Hello in local, "I love the posters" in local, or "I see you Rixx!" in local. I got accused of being "hostile", of purposefully hunting newbros, of running away, of blobbing (I was mostly alone) or worse. Thing is, these moments are also awesome. I had some good fights and I talked to a lot more players than usual. I gave advice. I scared a few people that needed scared. And I had an opportunity to create some solid content for some players that obviously needed it. What more can I ask for?
It comes with the territory.
------------------
I hope you all watched the Alliance Tournament feeders this past weekend or plan on watching the next and final rounds this coming weekend. I've watched each match about three times now. Sadly we lost a few of our regular practice partners during the tournament and I'm sorry to see them go. I was rooting hard for all of you. I've been in 23 AT matches in my career and my 24th is coming up soon, and one thing I've learned is that sometimes you just lose and there is nothing you could have done to change it. That happened a lot this past weekend. Matches were lost before the timer started, or afterwards due to bad luck, random DCs, or just plain nerves. It happens. But there were also moments of pure brilliance and down to the wire matches that could have gone either way. To everyone that participated - well done.
Our own planning and scheming proceeds forward. As a small Alliance we face our own challenges, the ones we've always faced. All of which is taking up an insane amount of my time right now. But hopefully it will all be worth it in the end. Or it won't. I have no idea which it will be.
------------------
Thanks, as always, for reading. More to come.
AT18 Eve misc