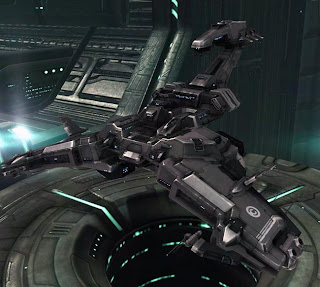 Tyrannis is deployed and all I can think about is my new Scorpion!

Before I get into the post - big thanks to CCP for a seamless patch (despite the server issues and the delays) that - unlike Dominion - didn't knock me out of the game for over a week!  I'd be a very happy person if I never had to live through that again.  So thanks.

Like many of us, I am an Internet Spaceship junkie.  I admit my addiction.  And I know this much about myself, I can't get enough.  Bring it on.  Yesterday was like that for me, the exact moment I got back into the game I went and bought and fitted a brand spanking new Scorpion.  I was like a kid in a candy store my friends.

It's like that really ugly Aunt of yours, whom you haven't seen since last week, showed up looking like Pamela Anderson one day.  Wooohoo!  And not only does the Scorpion and its kin look sexy and hot, but... and here is the coolest part... it has a spinny radar dish thingie!!

Before yesterday if poor Rixx wanted spinny bits he had to fly a Hawk or, gulp, a Catalyst.  Those are the only ships I can currently fly that have spinny bits on them.  That doesn't count my Alt flying a Hulk, cause goodness knows what Industrial Revolutionary thing is going on with that ship!  Cogs?!?  Cogs AND lasers?  I dunno friends, it perplexes me every time I look at it.  And those shock arm things?  What the heck is going on inside a Hulk?  The mind reels.

But now, thanks to the magic of Tyrannis, the Scorpion is badass and spinny bit functional.  Since I don't have anything else to do these days, I did show off my new Scorpion to anyone who wanted to see it.  I also spent some time just spinning it around in station... just for old times sake.

Ok CCP.  You've shown us that you can improve your ship models, so get busy updating more of them!  Mini-patches are accepted.  The Helios needs some serious love, the Blackbird and the Moa would be my next choice.  So, sometime in June then?

So, is the Scorpion now the coolest looking Battleship in Eve?