Where Da Aliens At? 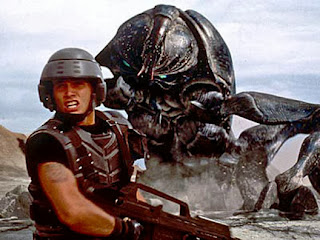 If I told you I was building a massive on-line science-fiction universe with starships, thousands of planets, jump-drive technology, clones, warp-core stabs, space stations, local chat spam, and gorgeous nebula to look at - but it wouldn't have any aliens in it - you'd call me a loon.

Where da aliens at?

Every race in Eve is descended from the first human stock to get stuck on the wrong side of the Eve Gate. Even the mysterious boogeymen the Jove. (And where have the Jove gone btw? Been a long time since we've heard anything from them!) All the NPC races, all the character races, all begat from those first humans who forgot to check the life-span of the gate they just jumped thru. We are descended from idiots. (True story)

But this expansive universe is seemingly devoid of life. Barren. All these worlds and not one iota of alien life? Ok, it is possible that the Sleepers might, might be alien. I suppose that is a start. Let us hang our hopes on that being the case, but unless I'm missing something (and I am no lore expert) the Sleepers are a branch, spin-off, second cousin to the Jove. And that makes them, once again, human based. Albeit altered and evolved over the last 15,000 years.

The bigger question is this, do we even need aliens in our Eve?

As much as I would enjoy getting a message someday in-game that said:

"Capsuleers! Reports of a large alien anomaly attacking a station in the Hevrice system are accurate. All Capsuleers are asked to rally and defend New Eden from this unknown threat and drive back the alien Space Octopus currently sitting on station six! MAYDAY! MAYDAY!"


It is a rather silly thing. And we don't really need it, do we? I once wrote what I think is the perfect way in which aliens can be introduced into New Eden without messing up the entire thing that CCP has created, you should go read it, it is rather brilliant.

But aside from that, what purpose would aliens serve and do we have a need for them? My honest opinion is that they would serve no purpose and that we have no hole for them to fill. Despite the awesome nature of random alien events like the one I described in the article I linked, having aliens in Eve could potentially be rather horrible.

Remember my opening paragraph? The one you called me a "loon" about? It is crazy and it is brilliant genius at the same time. It was crazy for CCP to create this universe without aliens in it, but it was also pure genius. We are humans, at least I am going to assume so for the sake of this post. We play Eve. We fly spaceships. We are not playing an Avatar based game, despite all the progress over the last decade in that direction, this is still an outer space based universe. Our race has very little to do with it frankly. And aliens would only muddy those waters, while bringing very little to the table.

Personally, I think random alien "mystery" events would be incredible for Eve. Every so often something really bizarre and wonderful happens that no one can explain. I think such events would add an air of wonder and science-fiction realism to New Eden. But I think playable or NPC aliens are for another game.

Aliens are fun little critters. But unless they are handled correctly, they can also be rather silly. Eve wasn't built for them. Eve was built for us.