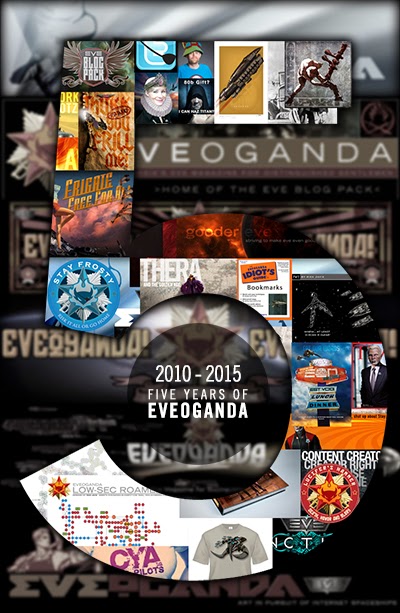 On January 19th, 2010 I posted my very first post here on EVEOGANDA. 1,480 posts and five years later and it is suddenly 2015. I have been happily pounding out almost daily mostly non-weekend posts since day one about Eve Online. Over 5 million visitors have graced these pages, from almost every country in the World. And that is pretty gosh darn awesome.

These pages have provided me with a platform from which I've been able to accomplish many things over the years. From sharing my love of Eve, to helping others in the Community, to holding events, challenging the status quo, mocking things that needed to be mocked, restoring Frills to the Vagabond, and building several Corporations and Alliances. EVEOGANDA has given me a voice in the Eve Community which I have tried to use as a tool for advocacy and positive change. A place to share, laugh, and journal the struggles of playing the world's most challenging virtual experience.

It has also served as the fulcrum around which I have been able to "meet" hundreds if not thousands of fellow players, bloggers, artists, writers, journalists, editors, programmers, students, military... name an industry and name a country! And that has been, and continues to be, a rare privilege. And one that I try to never take lightly. And soon I'll be headed to my first ever Fanfest to meet fellow Eve players in person!

A lot has happened in those five years. I've gone from a two year old player living in Providence, to a seven-year veteran running a five hundred player Alliance. It has been a remarkable journey and one that I've enjoyed sharing with all of my readers.

Will I be writing EVEOGANDA for another five years? I honestly have no idea what the future holds. But as long as you keep reading, and I keep playing, we might as well see where this journey takes us.

To all of you, thank you. And keep the courage.


EVEOGANDA: The crossroads of Eve and propaganda that serves to promote a love of Eve Online, the Community of fans, writers, and artists that play it, and the unique perspective of one character in particular - Rixx Javix. Based on a true story.

Some Highlights from the past Five Years:

• After a lot of hard work, the Frills were returned to the Vagabond.

• The Ring of Fire Project. I am very proud of this campaign, which went on for some time and (I believe) planted the seed for what became the player memorial in Reykjavik.

• Twitter Hats! Long story, but they made Incarna funny.

• Low Sec Roamers Map! You really should have this!

These are only a few of the highlights from the past five years. We've held over a dozen in-game events - from FFA's to Deathraces to Frill Protests. I've drawn 72 panels of an Eve Comic. (That's crazy!) And generally tried my best to have fun among all the tears, drama, haters, and cross-eyed weirdoes that have threatened and warned me over the years. A few of which got into scary real world territory.

Despite everything, I'm still playing, still writing, still drawing spaceships. And still, after five years, still smiling. And I still feel like I'm just getting started.

I must be crazy.

From October 2012. A surprising amount of us are still kicking around the neighborhood.