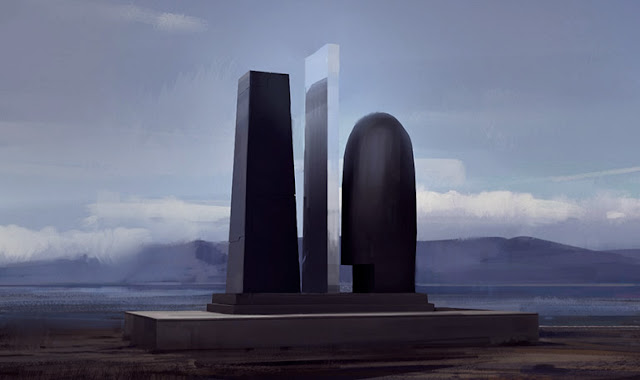 Before you go and get your panties in a bunch, I am not taking credit for the player monument in Iceland. Not directly. Let me try and explain what I mean.

Play Eve long enough and someone you play with, or someone you know, or someone you once asked to Hot-Drop PL will pass away. You might hear about it, or you might not. It might make International news or it might just be your friend having a heart attack in his chair while jumping gates. I can't even begin to tell you how many times over the past ten years I've lost someone that I knew inside the community or flew with as a player. Eve is life & death.


Yesterday a Reddit thread went up on the Eve Sub-Forum from Aelonius regarding the idea of an in-game memorial to the real life players that have left us. Since much of the Eve community is always in transition, many of you may not be aware that I've been advocating for such a memorial for almost four years now.

In the wake of Sean Smith's tragic death in Bengazi I began thinking about the passing of time. It wasn't just Sean's death that inspired me, that year had been a tough one all around as several players I knew had left us. But Sean was a special case in many ways, mostly due to the fact that it was so senseless and public. But Eve is getting on in years and as we've all seen, as Eve gets older so does the player base. In the last year alone I've lost a half-dozen friends that I know about.

So in September of 2012 I posted an idea on the forums and here on Eveoganda regarding an in-game memorial I called the "Ring of Fire", which would be created on the opposite side of New Eden from the Eve Gate. The memorial was always intended to be a way to honor all fallen capsuleers in a way that would be appropriate to the setting. If we are all immortal in-game, it doesn't mean that we all live forever. I wrote a lot of posts about it and the idea gained a tremendous amount of support around the community. I created several videos, wallpapers, and other material. I even appeared on a few Podcasts to promote the concept. The idea, as always, was to get the community and CCP thinking about the idea.

And then, in early 2014, CCP went and built the Player Monument in Iceland. I'd like to think that two years of talking about a player memorial had something to do with that decision, and I have reason to believe it did, but either way we finally had a monument.  Except not really.  The monument in Iceland is incredible, and I've been there and found my own character name among the etchings, but it isn't the same thing. The monument in Iceland is a testament to the players at the time it was built, but it is not a memorial to the fallen.

I still believe that an in-game memorial would be a welcome addition to New Eden and fit within the established lore. And yesterday we got the first indication from CCP Falcon that CCP is also thinking along these lines.

"This is actually something that I've been discussing for a while with both our dev and art team, and most recently I chatted with CCP Jorg, our Art Director about it.
I'm fully aware of how important paying respects for lost pilots is, I've been through that myself with a corp member who passed away when I was a player running my own corporation. It's incredibly painful and on a personal note I'd like there to be a single focal point in New Eden where pilots can go to pay their respects.
The idea that I pitched to our art team at the start of this year was a memorial site that acts as "The Tomb Of The Unknown Capsuleer", basically a monument in space that would be player designed, would have a deadspace area with decoration around it, and that would have a permanent honor guard of:
2x Marshal
2x Apocalypse Imperial Issue
2x Raven State Issue
2x Megathron Federate Issue
2x Tempest Fleet Issue
Obviously it's something that still needs a little more discussion, and scoping of the bandwidth that's needed, but it's certainly something that we'd like to do."

I reached out to Falcon yesterday and he not only confirmed this information, he also indicated that this might happen sooner rather than later. I volunteered my services to the concept, if there is anything at all that I can do to help. Which is one reason why I've written this post today.

Sadly that post was written over two years ago and no progress or updates have been forthcoming. As we've seen, CCP is committed to helping their employees and families thru memorial skins. Just yesterday as a matter of fact. Which is a fine idea, I value both my Blaze skins and now my Mindkiller skins. As I'm sure many of you do as well.

I won't stop advocating for a solution in-game. If Eve is to truly live forever - then this becomes even more important every day that passes. Eventually we will all be lost to the sands of time.