on September 11, 2018
Back in 2012 CCP started the "V3" phase of re-designing spaceships inside of Eve. Some of these early attempts at updating ships did not go well. But it wasn't until they released the Stabber/Vagabond re-design that we learned just how horrible these changes could be. The Vagabond showed up one day minus its distinctive and legendary Frills or Wings or whatever you want to call them.

What followed was my attempt to create a positive activism campaign among the community and try to get the Frills returned to the Vagabond. Matt Westhope over at Freebooted helped, and we created forum posts, a Frill Page, an in-game event sponsored by RvB (We had over 100 Stabber/Vagabonds show up!) and more. I even created "frilled" versions of Twitter avatars. 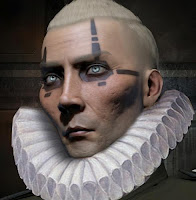 Eventually, after having a tremendous amount of fun and also managing to keep things positive, we heard officially from CCP:

A number of you are missing the so called frills we had removed from the Vagabond during the v3 process, and I think it’s totally fair that I (the Art director) give you an explanation why we did that, and what our intentions (visually) are with the Vagabond in the future.

EVE is constantly under development and we in the art team look at the renovation process as an ongoing never-ending task that we love to keep working on alongside the new assets we make every year. Some players don’t like to see to many changes made to their beloved ships, but because of this, the fidelity of the game after all these years is still hard to beat and EVE keeps getting great reviews for the art every year.

However maybe the decision to remove the frill from the Vagabond was taken too lightly and I didn’t realize how attached to the look of the ship you were. To me, as the Art Director the Vagabond is a Thukker version of the Stabber, but with Brutor sails attached (rather badly, with intersecting polygons) to the bridge area that make the ship look a bit silly. But after giving it some thought I can understand the iconic appeal. I think you should get your frills back in some way or the other.

That being said, I always wanted to fix the old Stabber up a little bit and give it some more love. I’m not talking about a huge overall change to the ship. But rather just balancing a bit the engine area and making some parts a little more believable. This would of course give us a chance to give the Vagabond some extra care and design the frills with Thukker and some functionality in mind. I already have Stephan Stölting an amazing concept artist working on it and I promise to keep you posted about the development in the near future. Until we finish it you still have to live with a “no frills” Vagabond.

Needless to say it worked and today the Vagabond continues to fly proudly Frilled. Even today this incident remains legendary both in the Eve community and at CCP. Just this past spring in Iceland I talked to several new members of the Art Department about the Frill campaign.

This incident helped both CCP and the player base learn valuable lessons about "legacy" and how important it is to both respect and honor the spaceships that we fly every day. Every time a ship is updated today I always look to make sure those lessons continue to be honored. I thought this was an appropriate post today especially with the new Caladri Osprey line making its debut in-game.

If you are interested in reading more just use the Search Function to search for Frills.